20 Most Stunning Waterfalls Around the World

Visiting a waterfall is one of the most spectacular experiences ever.

These waterfalls are world-renowned and postcard-worthy, surrounded by picturesque cliffs or jungles and with water often cascading down from impressive heights. To help guide you to your next adventure, we have listed the top 20 most beautiful waterfalls in the world that you can be sure to add to your travel list. 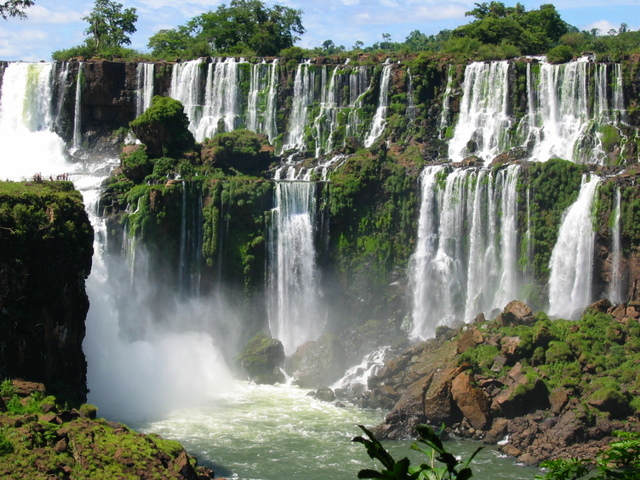 Millions of visitors come to see the Iguazu Falls, a system of more than 270 different falls, in Iguacu National Park. Flowing from a combination of the Iguazu and Parana Rivers, the falls sit between Brazil and Argentina. The falls are so spectacular that the spot is considered one of the most mesmerizing places on Earth. 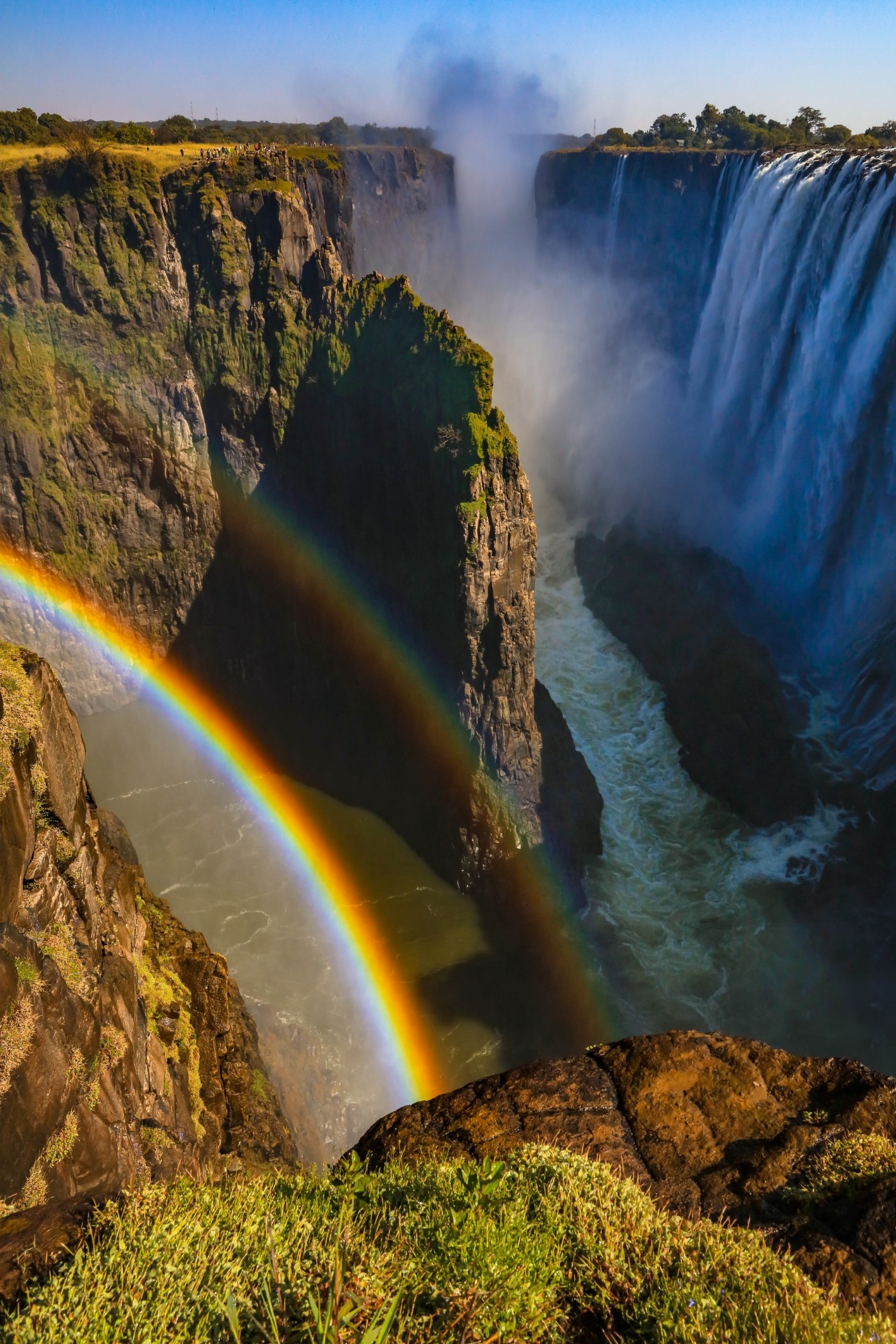 Photo by paul milley on Unsplash

The Victoria Falls is famous for being the largest waterfall in the world, though technically it is not. At an awesome 355ft high, the Victoria Falls is commonly known due to the breathtaking height the water rapidly falls at. These falls are iconic and described as ‘once in a lifetime’ by many. What’s more is that the waterfall has a vast natural pool where visitors can swim safely. 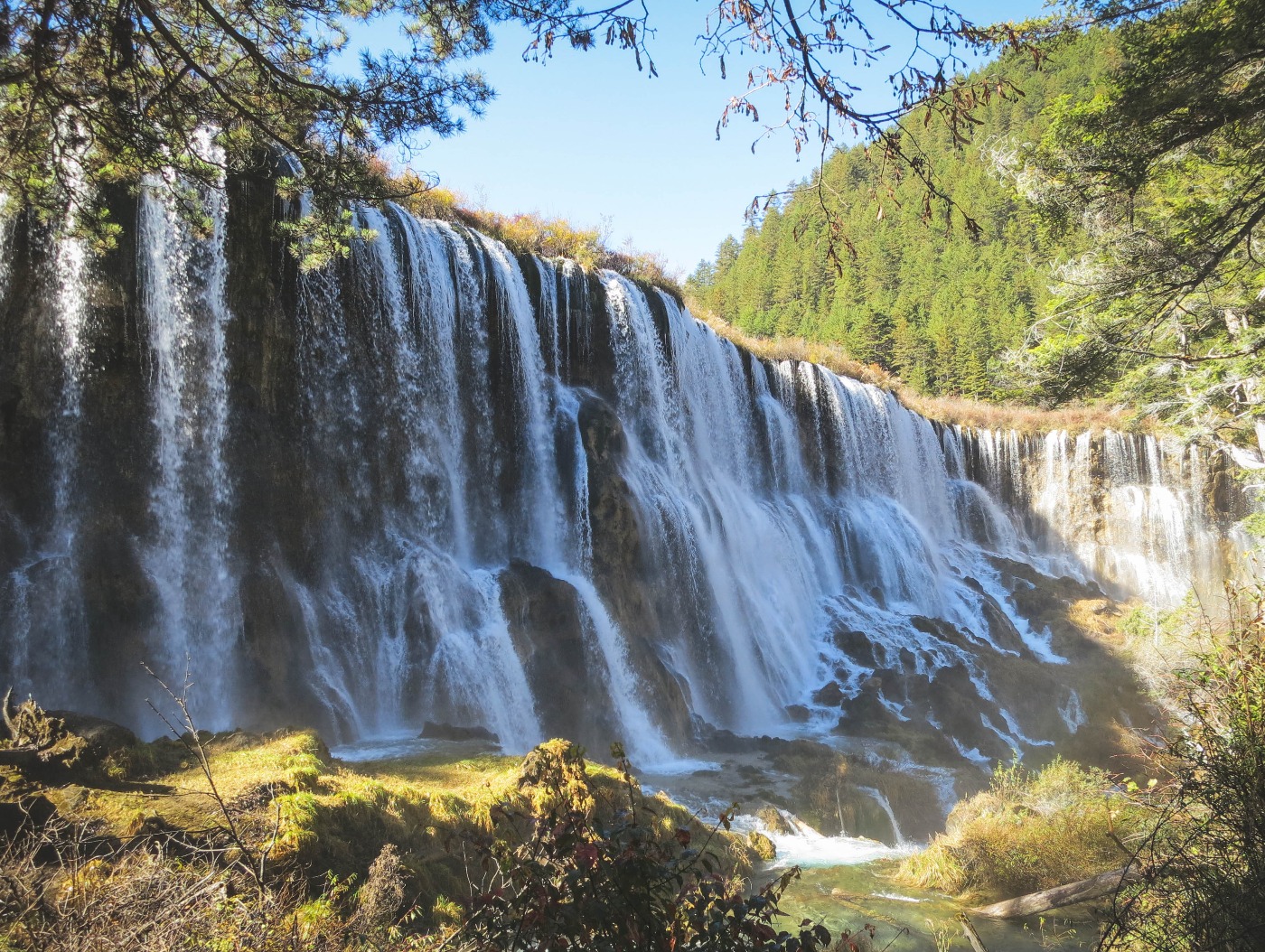 Cascading off a 30-storey cliff, surrounded by a lush green forest, the magnificent triangular Mae Ya falls are among the most beautiful waterfalls in Thailand. Found in the Doi Inthanon National Park, about 45 kilometres from Chiang Mai. At the foot of the falls, there is also a natural pool where visitors can take a dip. 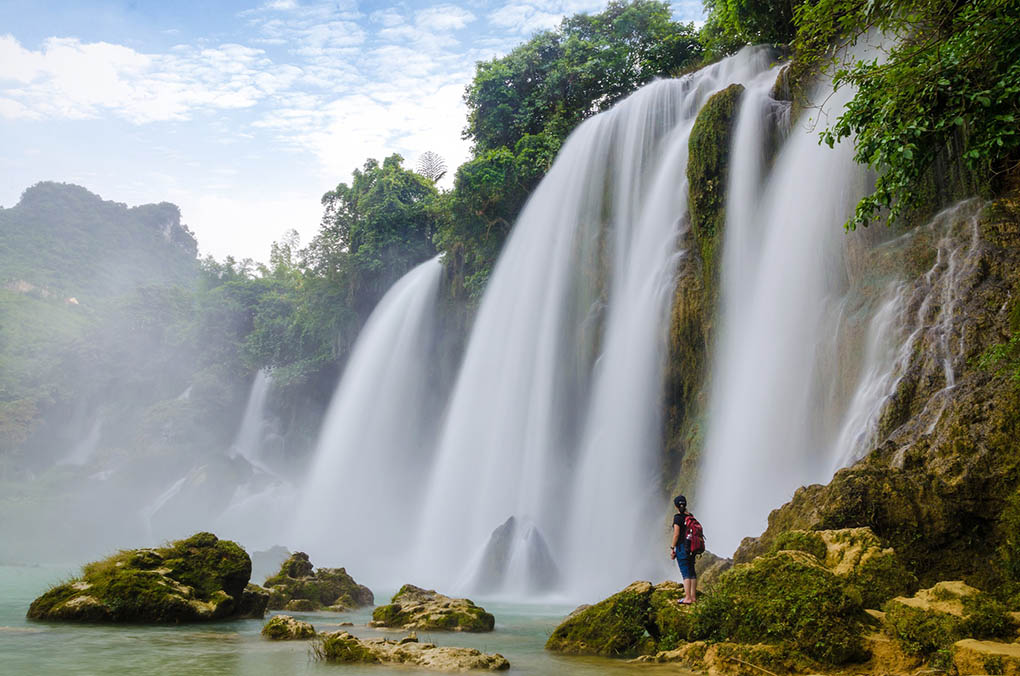 Image by Tuan Hoang from Pixabay

The waterfall drops 30 m. It is separated into three falls by rocks and trees, and the thundering effect of the water hitting the cliffs can be heard from afar.It is currently the 4th largest waterfall along a national border, after Iguazu Falls, Victoria Falls, and Niagara Falls. Somewhat nearby is the 1000m long by 200m wide Tongling Gorge in Baise City of Guangxi, accessible only through a cavern from an adjoining gorge. Rediscovered only recently, it has many species of endemic plants, found only in the gorge. 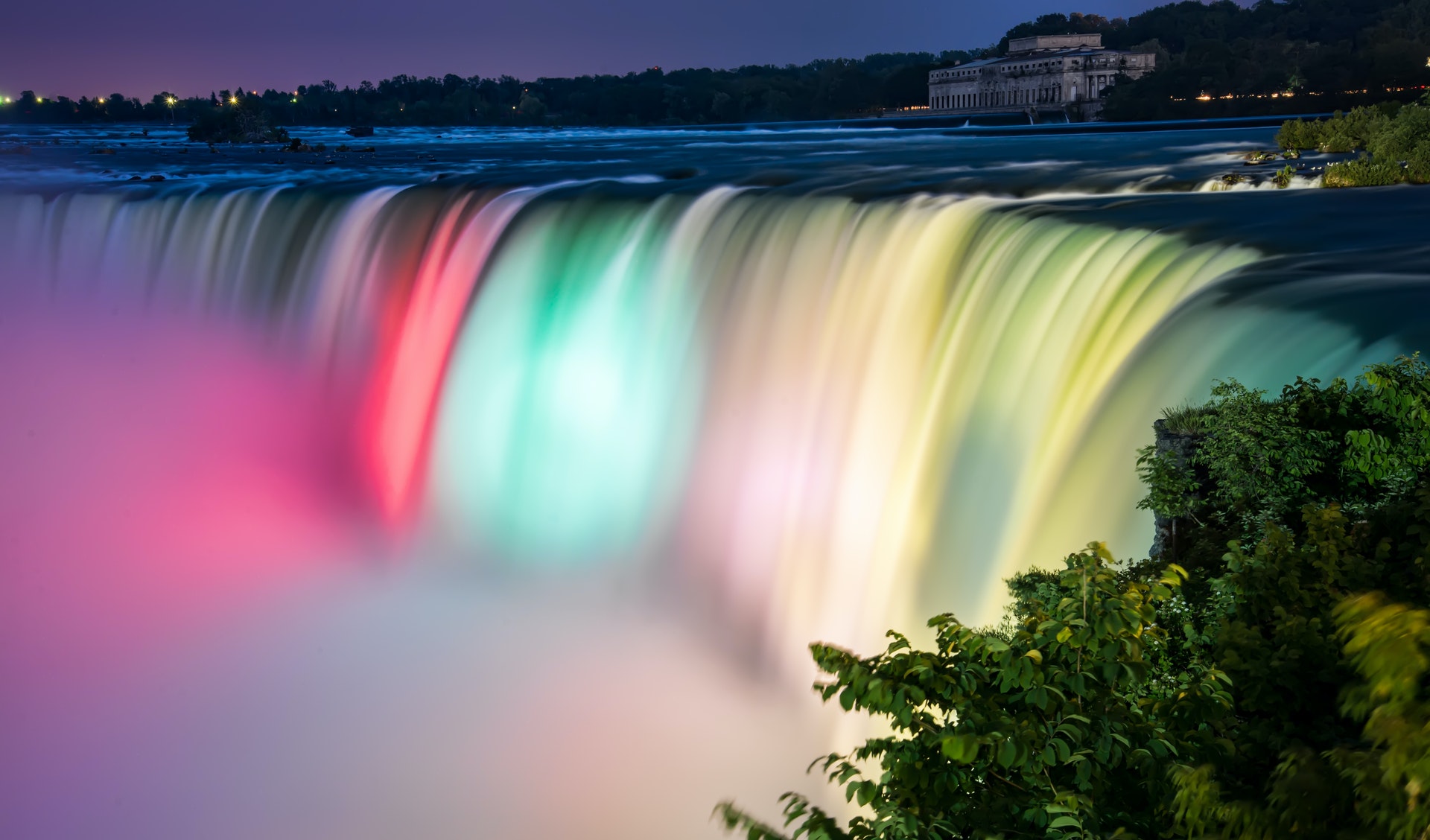 Photo by James Wheeler from Pexels 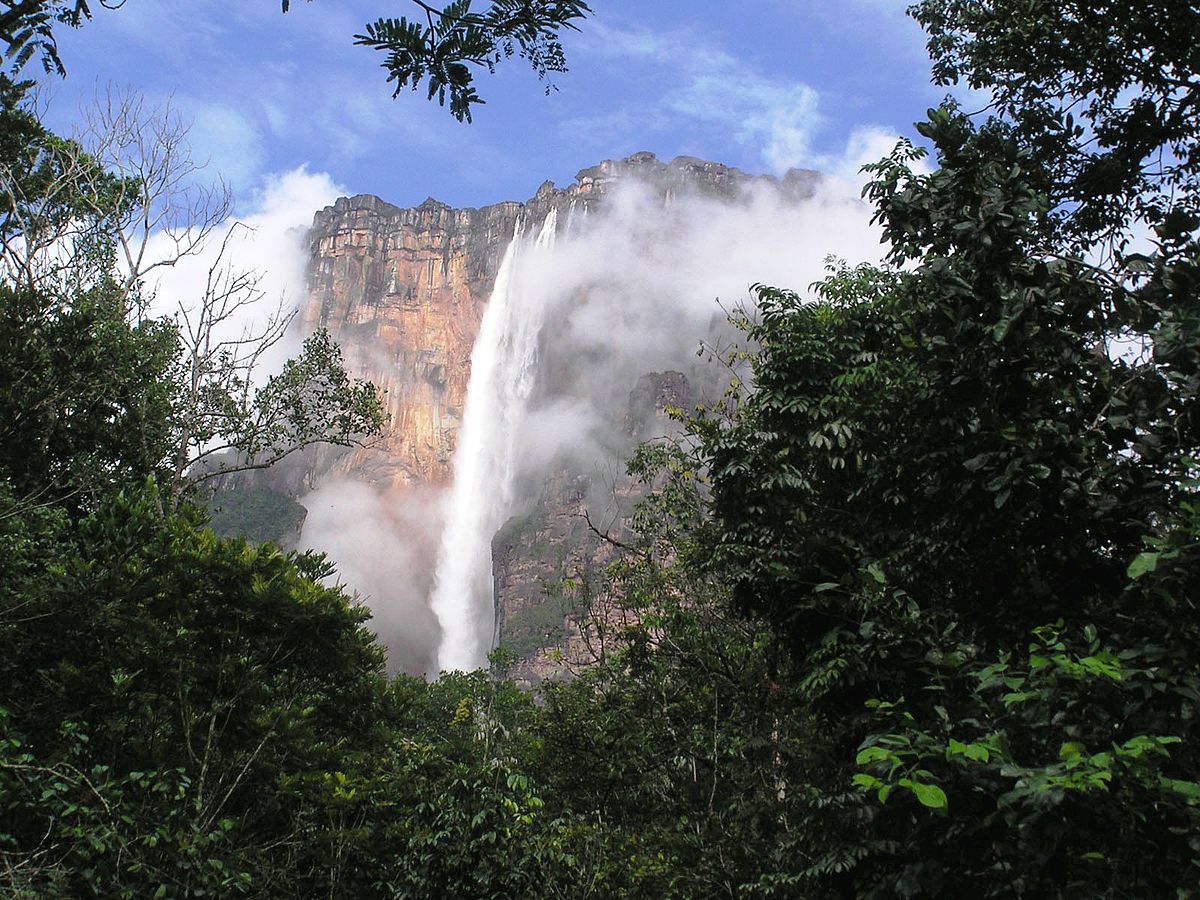 Photo by Yosemite, from wikipedia.org

Angel Falls is a waterfall in Venezuela. It is the world's tallest uninterrupted waterfall, with a height of 979 metres (3,212 ft) and a plunge of 807 m (2,648 ft). The waterfall drops over the edge of the Auyán-tepui mountain in the Canaima National Park (Spanish: Parque Nacional Canaima), a UNESCO World Heritage site in the Gran Sabana region of Bolívar State. 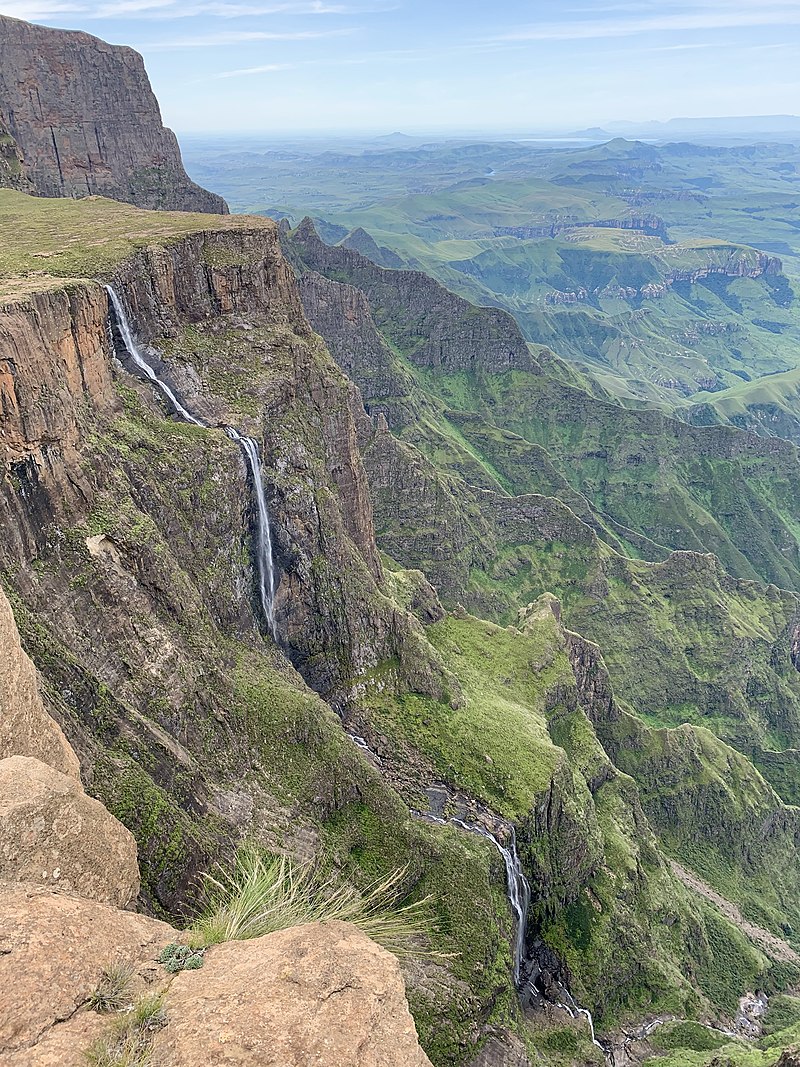 Tugela Falls is one of the highest waterfalls in the world and the highest waterfall in Africa. It is located on the Tugela River in South Africa’s KwaZulu-Natal province. Tugela Falls is 948 meters high. Only Angel Falls in Venezuela is higher. Tugela Falls and Tugela River get their name from the isiZulu word thukela. It means “something that startles.”, the falls stand out sharply against the towering rocky mountains making them a sight to behold. 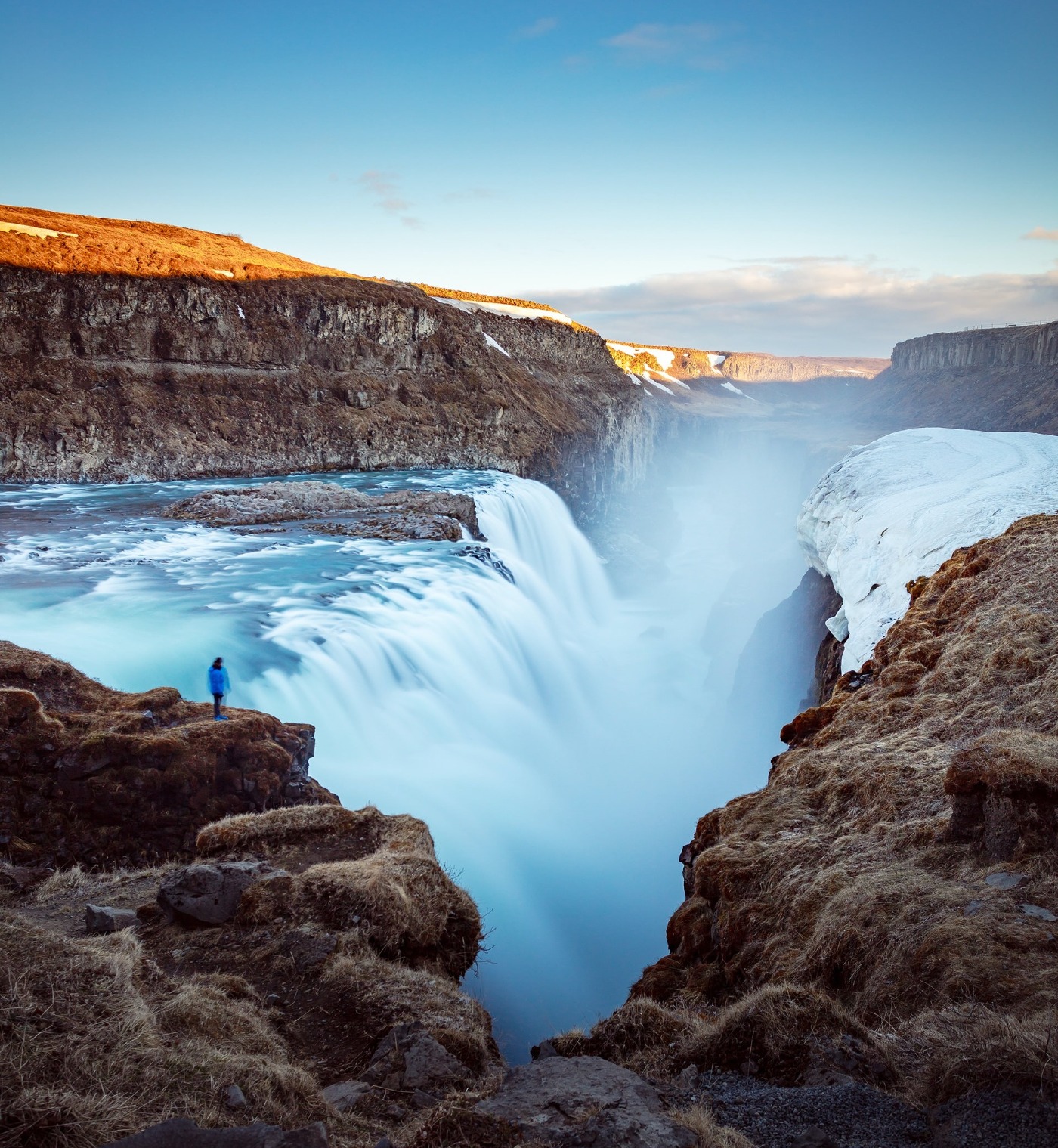 Image by Emphyrio from Pixabay

Waterfalls come in all shapes and sizes, as proven by the wonderfully distinct falls of Gullfoss in Iceland. This amazing waterfall is an iconic attraction in Iceland, thanks to the way that Gullfoss changes direction between its two tiers. After the Hvítá River falls over the first tier of the waterfall, it takes a sharp 90 degree turn before the second fall, creating a staircase effect. The waterfall’s name which translates as “Golden Falls” comes from the golden hue that’s occasionally visible under sunlight, while it’s also common to see rainbows within its heavy mist. 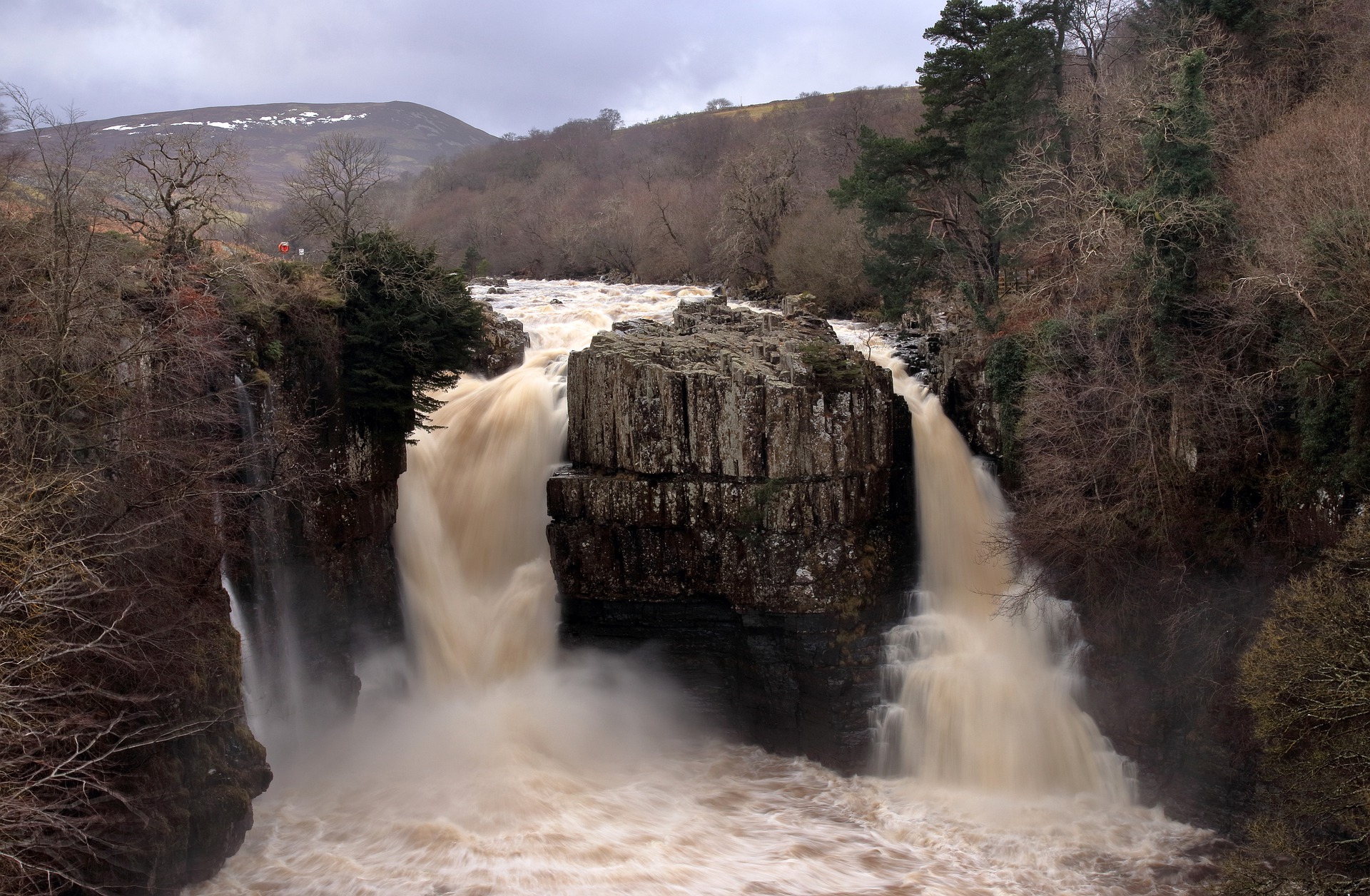 The fast-flowing High Force waterfall in County Durham make it one of the most spectacular and beautiful places in the UK. Here, the River Tees drops 71 feet, over a precipice (called Whin Sill), creating twin falls surrounded by a diverse range of flora and fauna. In the winter, the falls sometimes freeze over, creating stunning ice formations. 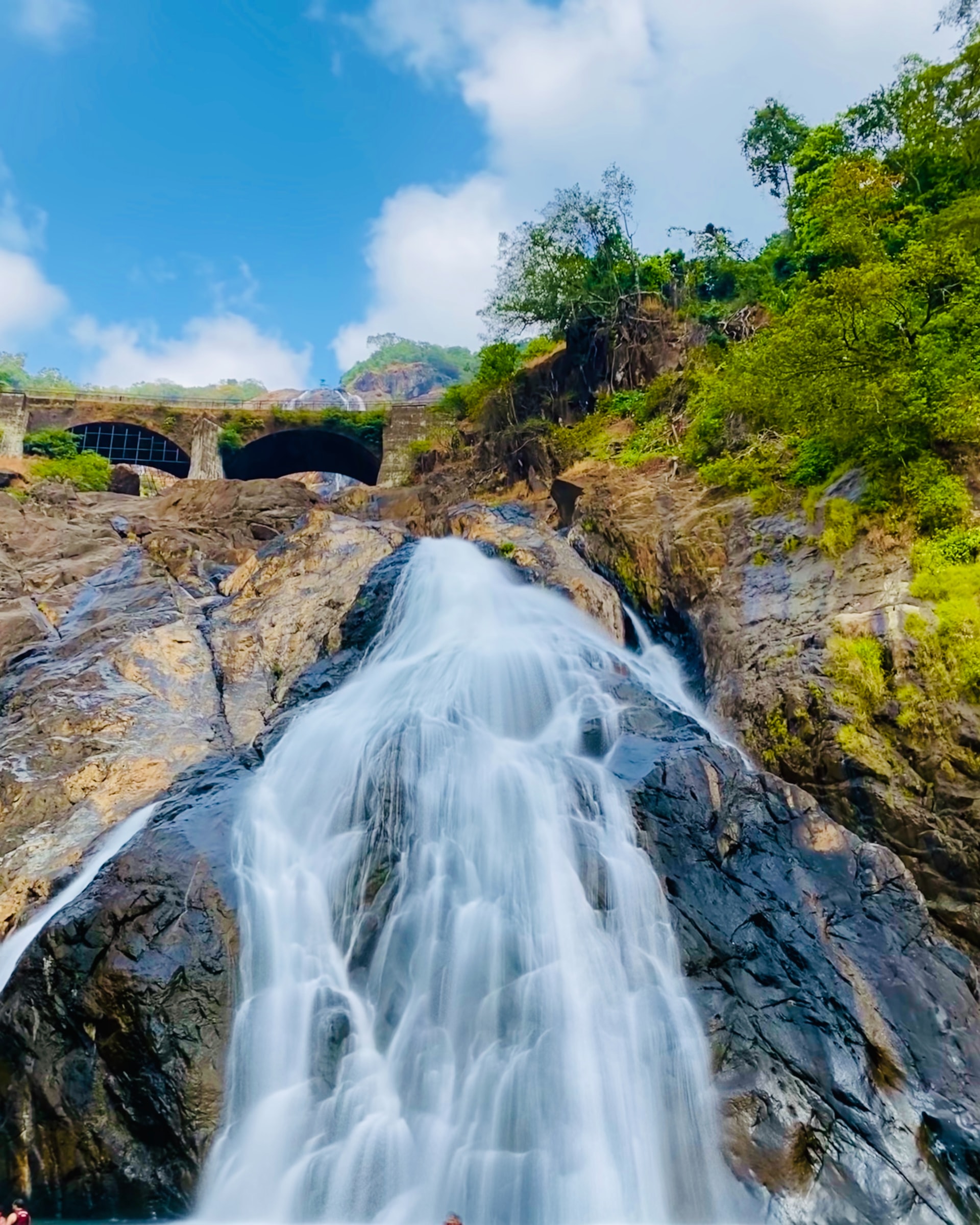 Photo by Shiv Patel on Unsplash

Dudhsagar Falls (lit. 'Sea of Milk') is a four-tiered waterfall located on the Mandovi River in the Indian state of Goa. It is 60 km from Panaji by road and is located on the Belgaum–Vasco da Gama rail route about 46 km east of Madgaon and 80 km south of Belagavi. Dudhsagar Falls is amongst India's tallest waterfalls with a height of 310 m (1017 feet) and an average width of 30 metres (100 feet). The falls is located in the Bhagwan Mahaveer Sanctuary and Mollem National Park in the state of Goa. 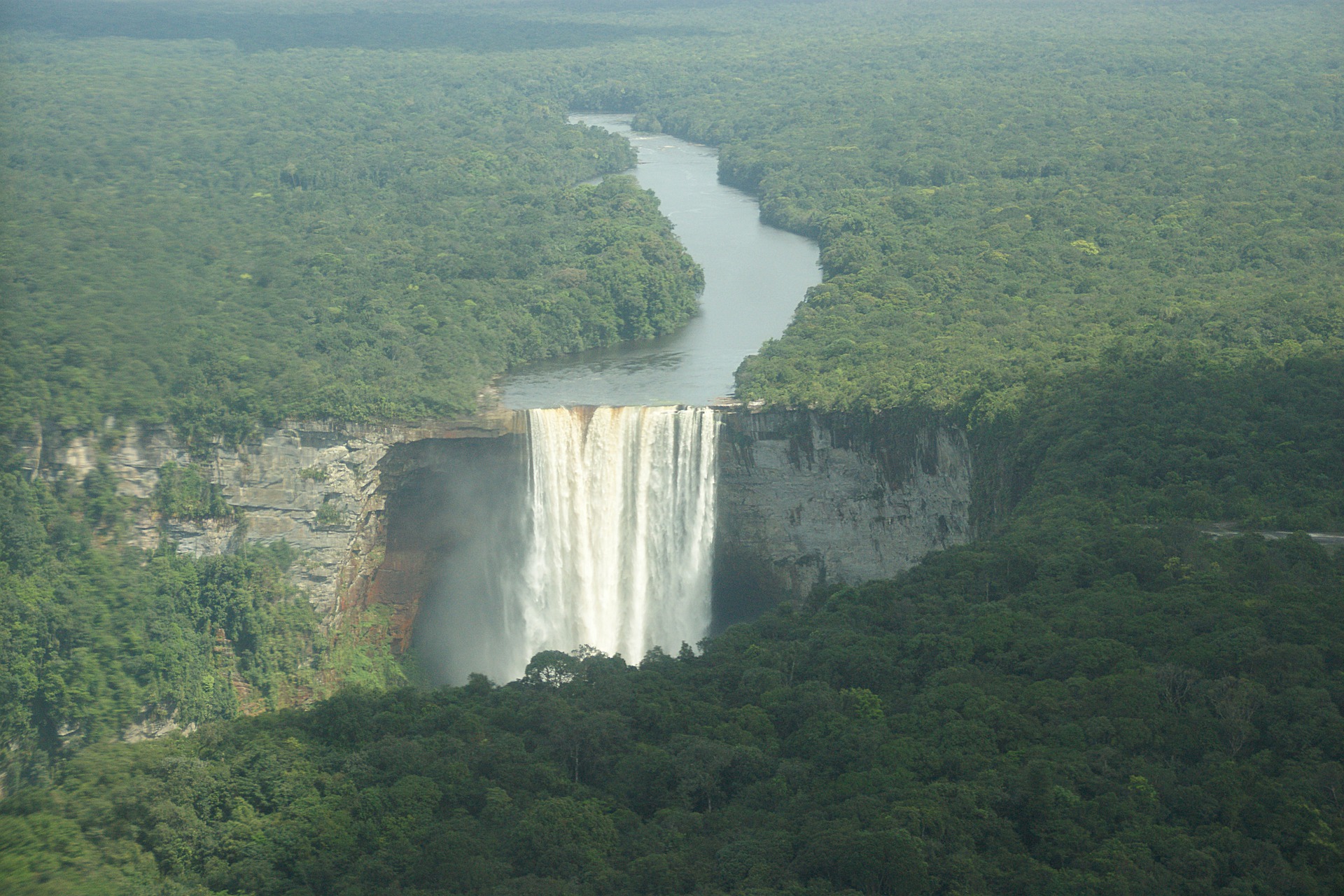 Kaieteur Falls is the world's largest single drop waterfall by the volume of water flowing over it. Located on the Potaro River in the Kaieteur National Park, it sits in a section of the Amazon rainforest included in the Potaro-Siparuni region of Guyana. It is 226 metres high when measured from its plunge over a sandstone and conglomerate cliff to the first break. Kaieteur Falls is about four times higher than Niagara Falls, on the border between Canada and the United States, and about twice the height of Victoria Falls, on the border of Zambia and Zimbabwe in Africa. It is a single drop waterfall. 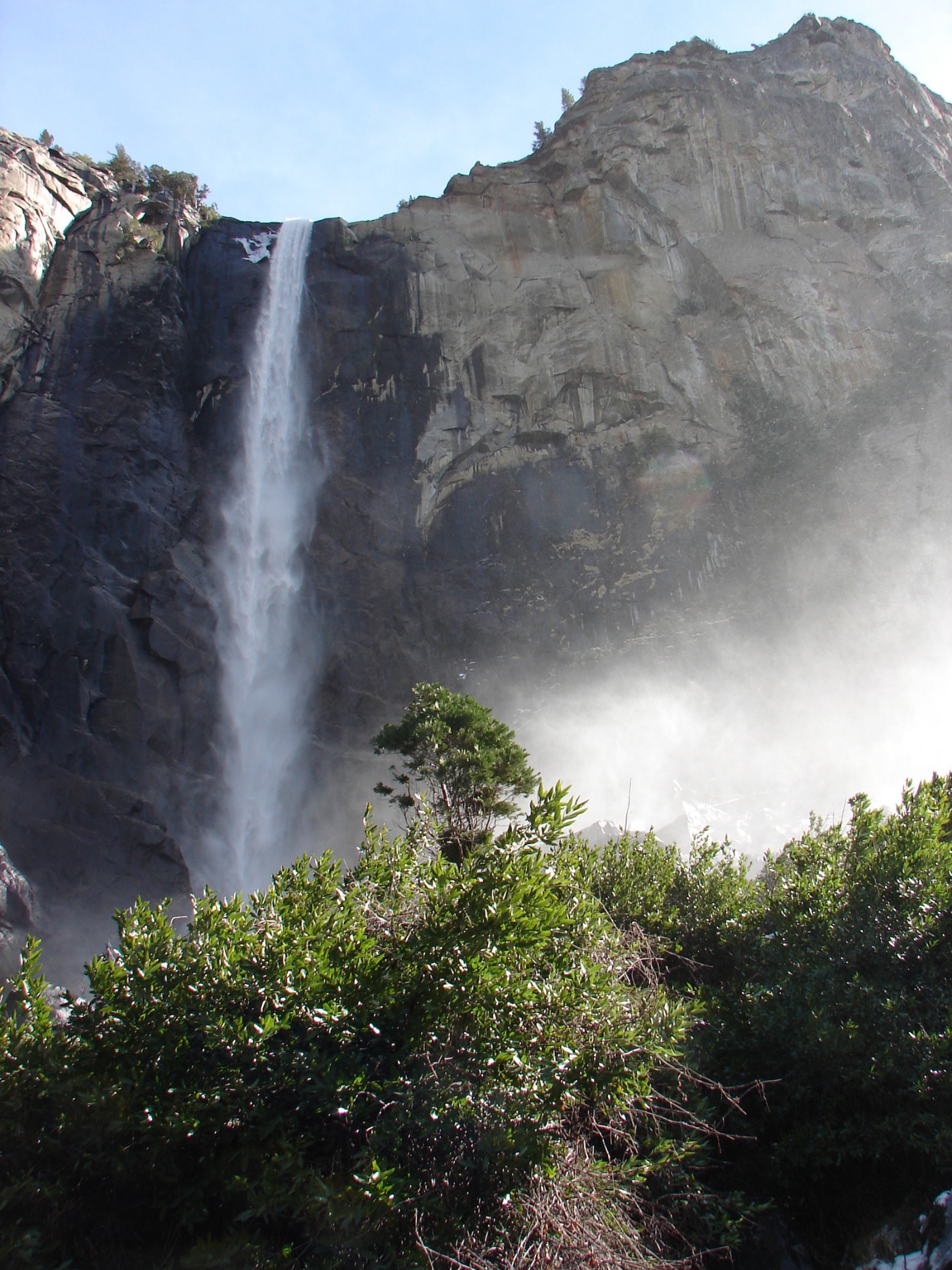 Photo by dereklink from FreeImages

The Yosemite Falls are made up of three separate falls that make a 2,425-foot drop, creating stunning lunar rainbows (called moonbows). Yosemite Falls are located in California’s Yosemite National Park which is home to five of the world’s highest waterfalls, as well as 300 lakes, meadows and sequoia forests. 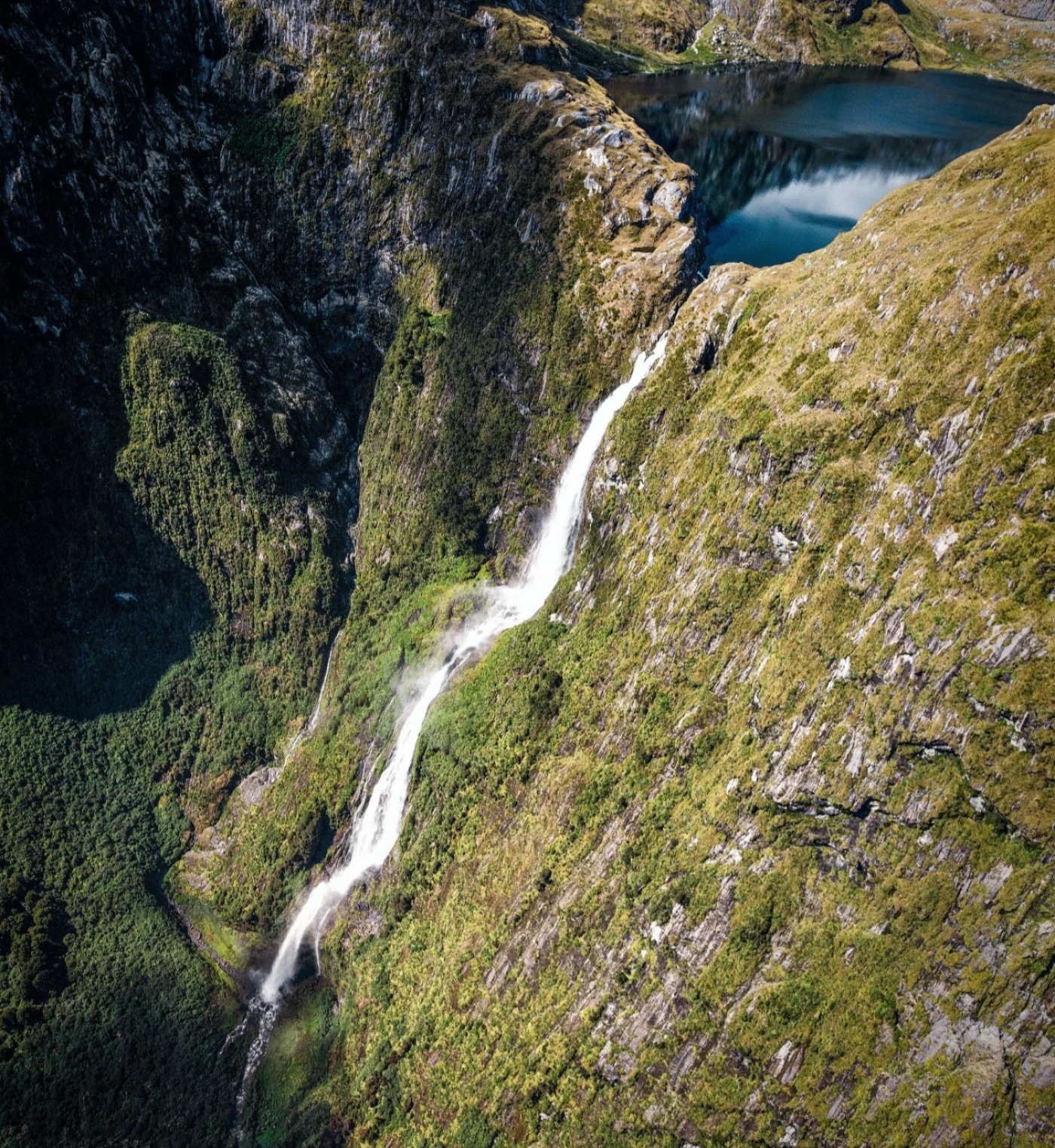 Photo by Samuel Ferrara on Unsplash

Sutherland Falls is a waterfall near Milford Sound in New Zealand's South Island. At 580 metres (1,904 feet) the falls were long believed to be the tallest waterfall in New Zealand. Terror Falls, in the Poseidon Valley (nearby), are 750m, and Browne Falls cascades 843 metres (2,766 feet) down a mountainside in Doubtful Sound, leading some to view that as the tallest. The water falls from Lake Quill in three cascades: the upper is 229 m tall, the middle is 248 m, and the lower is 103 m tall. Sutherland Falls are visible in the background of the eagle scene in Peter Jackson’s fantasy film The Hobbit. 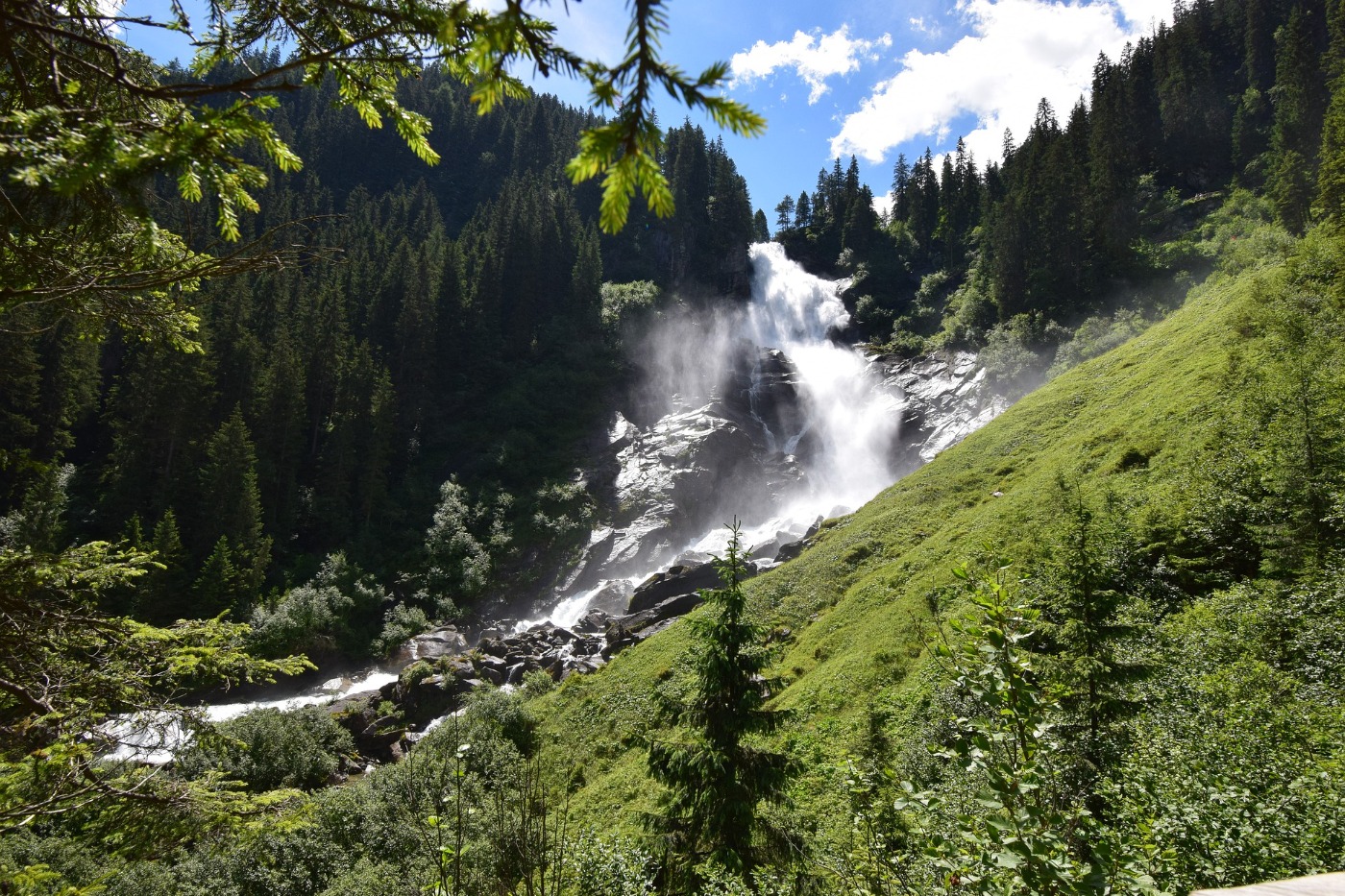 Image by Doris Pecka from Pixabay

The Krimml Waterfalls, with a total height of 380 metres (1,247 feet), are the highest waterfall in Austria. The falls are on the Krimmler Ache river and are located near the village of Krimml in the High Tauern National Park in Salzburg state.. The best time to see the falls is during the early summer when the flow of the glacial Krimmler Ache that feeds the falls is at its strongest. 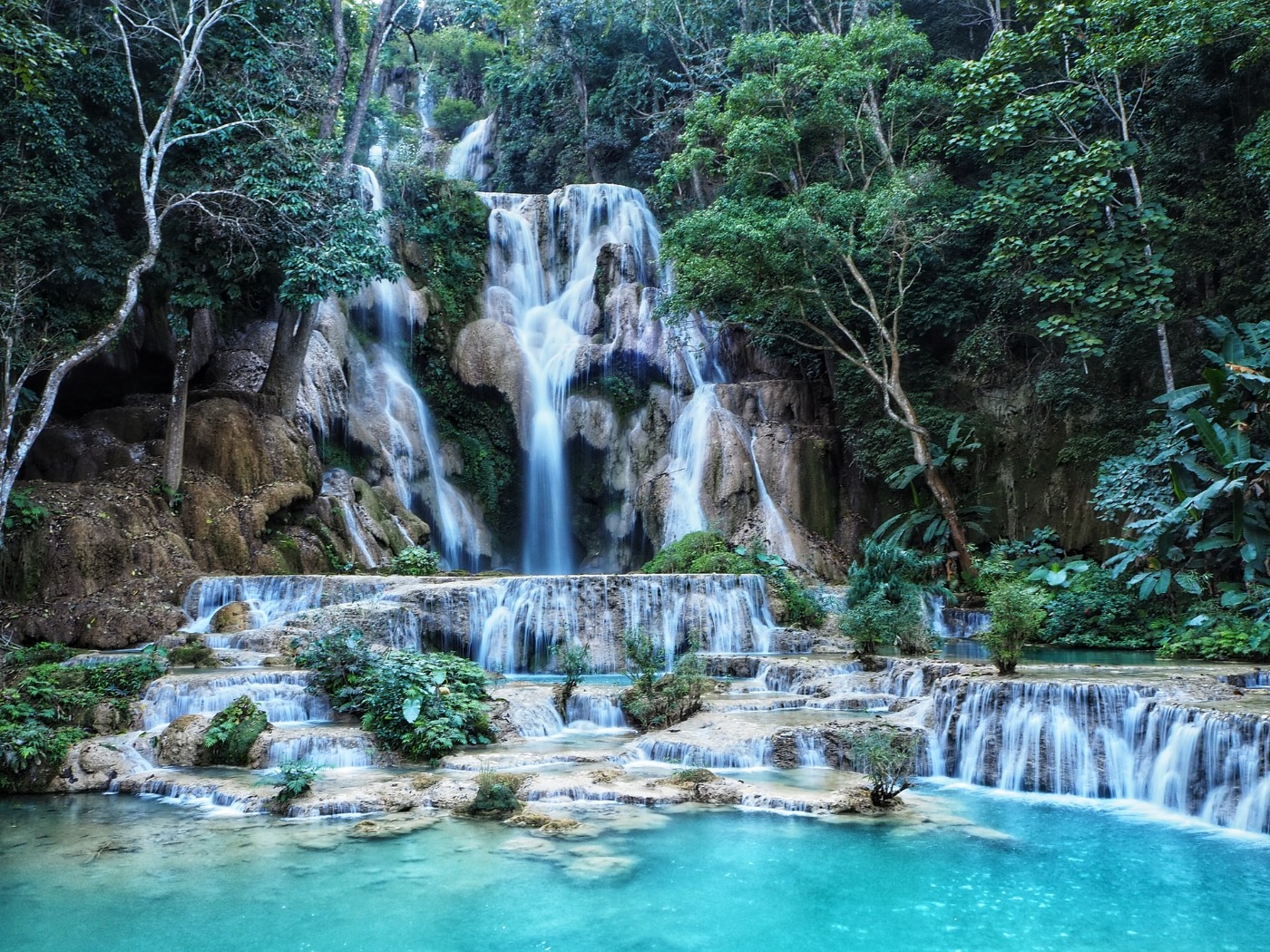 Photo by Simone Fischer on Unsplash

The Kuang Si Falls or Kuang Xi Falls is a three-tiered waterfall about 29 kilometers (18 mi) south of Luang Prabang. The waterfalls are a favorite side trip for tourists in Luang Prabang, and begin in shallow pools atop a steep hillside. These lead to the main fall with a drop of 60 meters (200 ft). They are accessed via a trail to a left of the falls. The water flows into a turquoise blue pool before continuing downstream. The many cascades of Kuang Si are not typical of waterfalls, adding to the attractiveness. 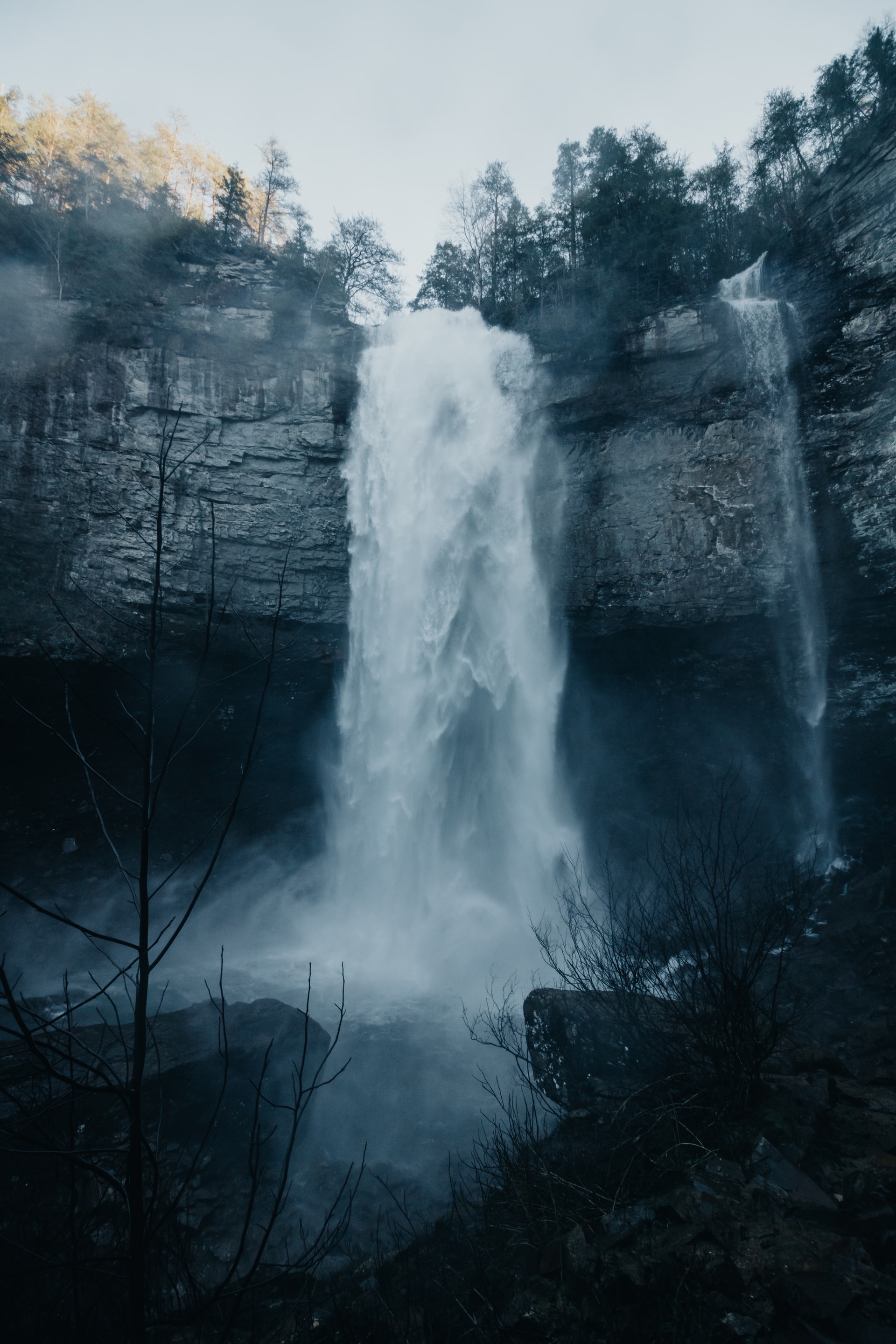 Photo by Will Swann on Unsplash

Fall Creek Falls, at 256 feet, is one of the highest waterfalls in the eastern United States. Fall Creek Falls actually has a little companion as well, with Coon Creek Falls just to the right of the far larger waterfall. 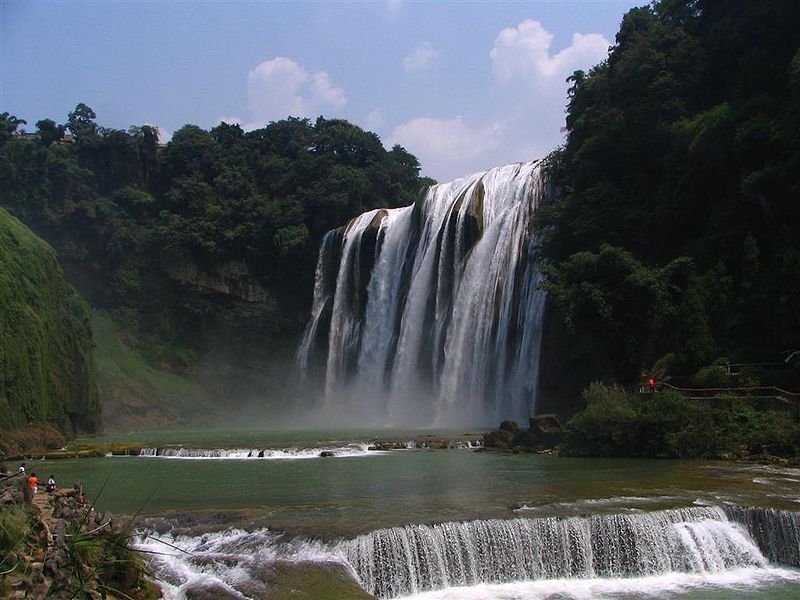 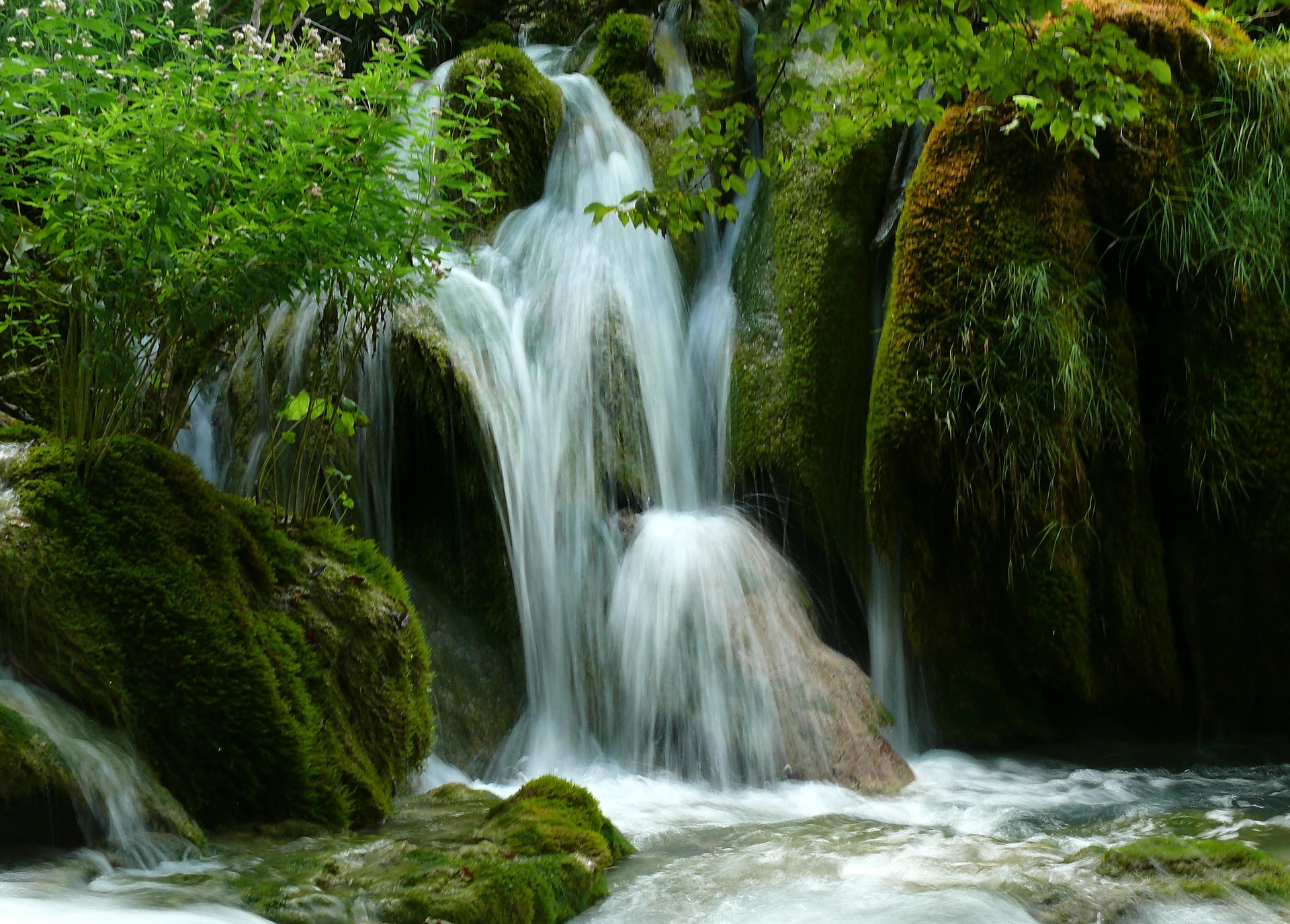 Image by Michał Lech from Pixabay

Plitvice Lakes National Park is one of the oldest and largest national parks in Croatia. In 1979, Plitvice Lakes National Park was inscribed on the UNESCO World Heritage list, due to its outstanding and picturesque series of tufa lakes, caves, connected by waterfalls. The national park was founded in 1949 and is in the mountainous karst area of central Croatia, at the border to Bosnia and Herzegovina. The important north–south road that passes through the national park area connects the Croatian inland with the Adriatic coastal region. 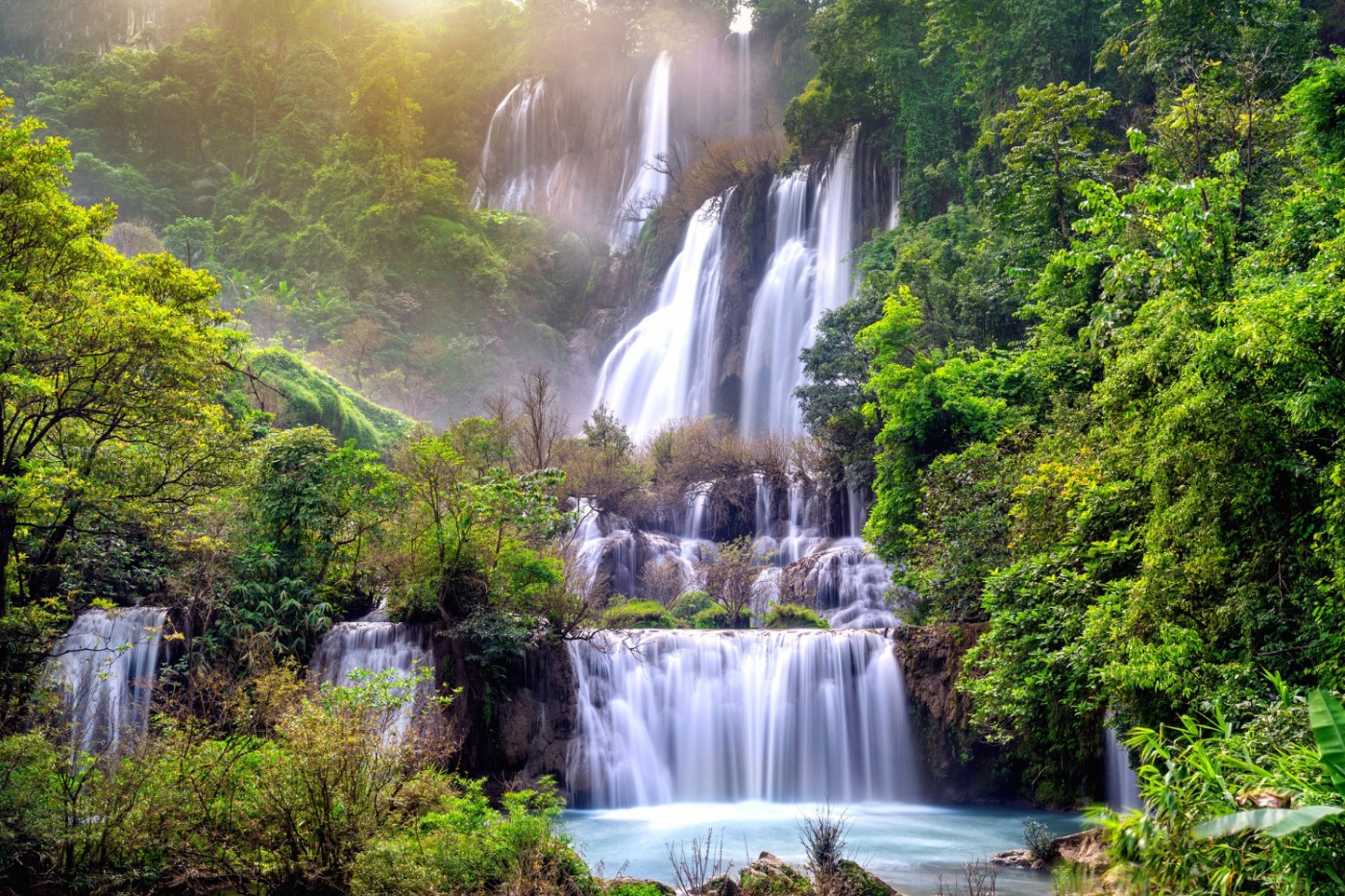 The Thi Lo Su Waterfall is claimed to be the largest and highest waterfall in Thailand. It stands 250 metres (820 ft) high and nearly 450 metres (1,480 ft) wide on the Mae Klong River, flowing down from Huai Klotho into the Umphang Wildlife Sanctuary in Tak Province in northwestern Thailand. The waterfall has apparently never been surveyed, so the figures given are approximate. 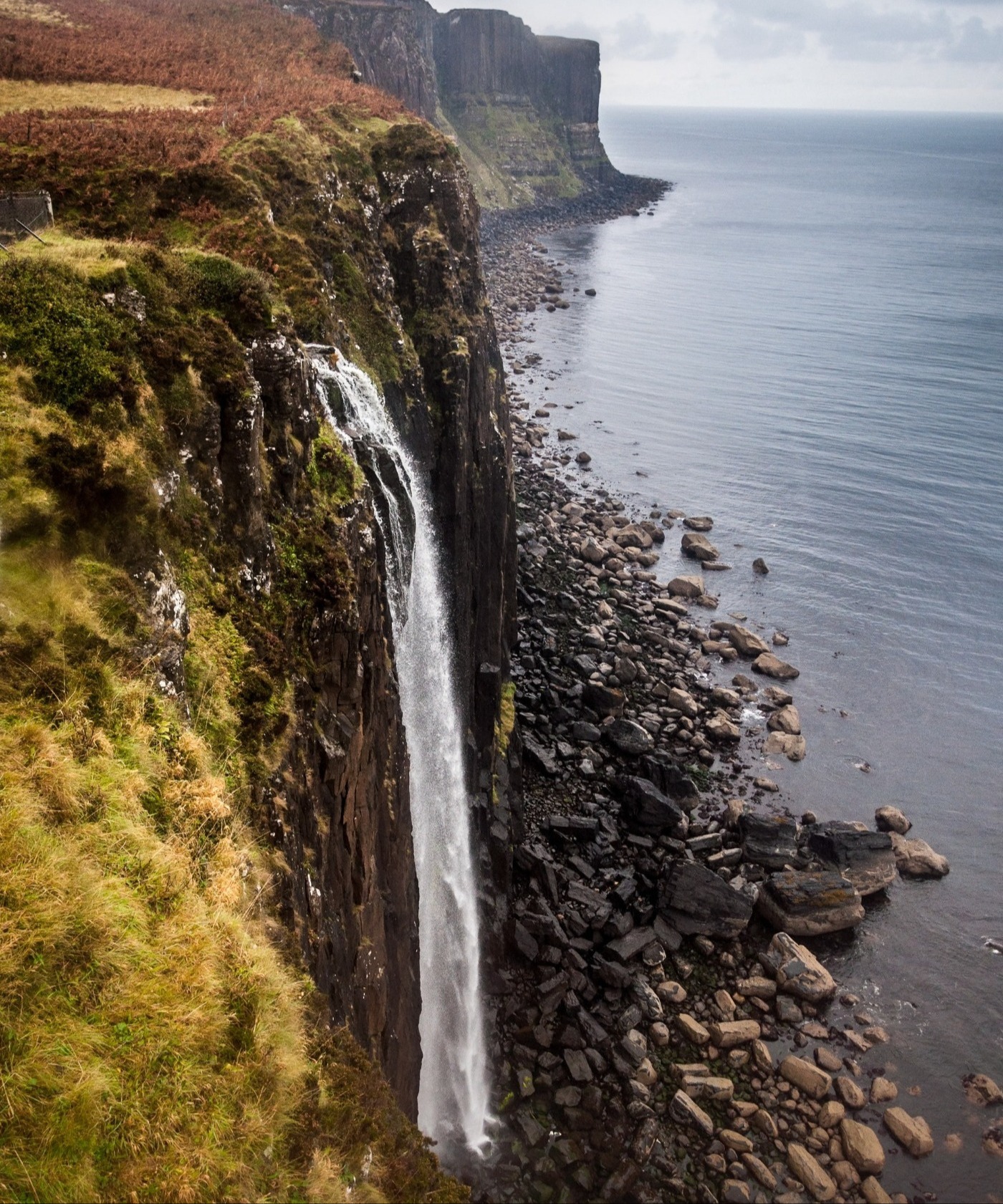 Photo by A P on Unsplash

Located near the magnificent Kilt Rock on the Isle of Skye is the stunning Mealt waterfall. Fed by the nearby Mealt Loch, this waterfall is over 180 feet high, and on windy days the water doesn’t even touch the ground. At the bottom lies the way into the Sound of Raasay. The Mealt Falls is a 55-meter free drop into the Atlantic Ocean.