Paragliding can be done around the world, but the most attractive locations offer wonderful views along with good instructions for beginners.

We have put together a list of the 15 most breathtaking paragliding locations. 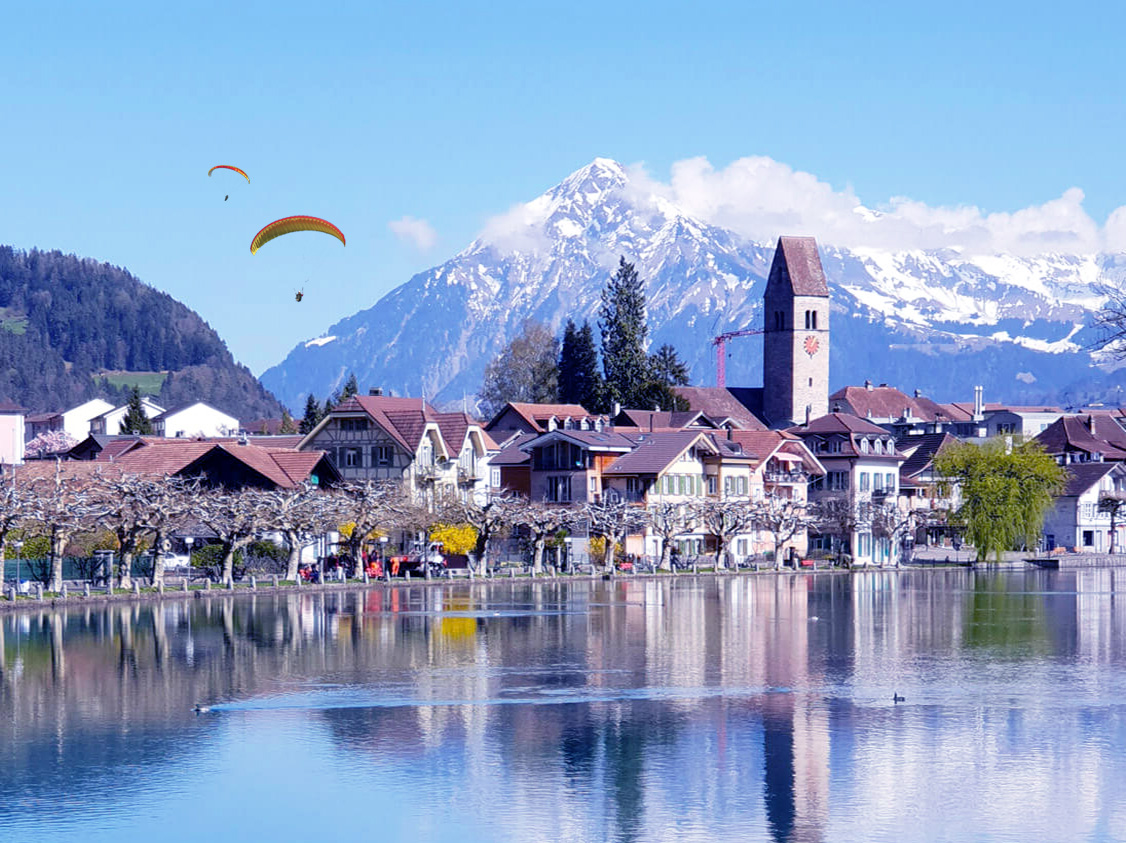 Interlaken lies in the Bernese Oberland on an alluvial plain, between Lake Thun and Lake Brienz. The vacation destination, which is presided over by the three mighty mountains, Eiger, Mönch and Jungfrau, is the starting point for numerous activities. This is arguably Europe’s most exiting adventure playground, and gliding weightlessly above the 4,000-metre summits is one of its biggest draws. 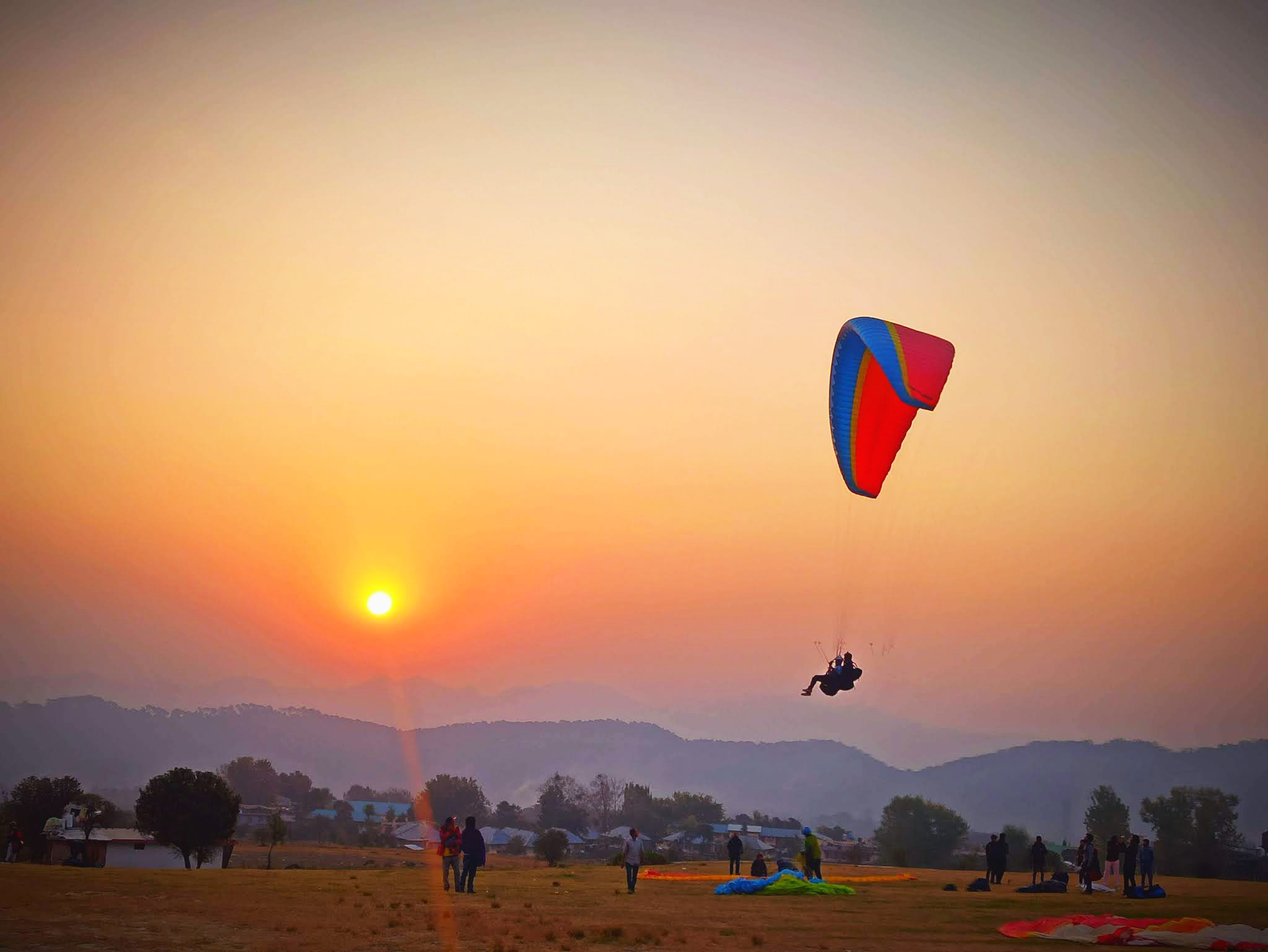 Located in the Kangra Valley of India's northern Himachal Pradesh state, the twin villages of Bir and Billing are the best places to try paragliding in India.

Billing is located at a distance of around 20 kms from Bir and it is renowned for paragliding activities in the country. Due to the presence of Himalayas and a serene landscape,it is worth paying a tribute to this wonderful paragliding venture which is the most renowned and important paragliding avenue in India. 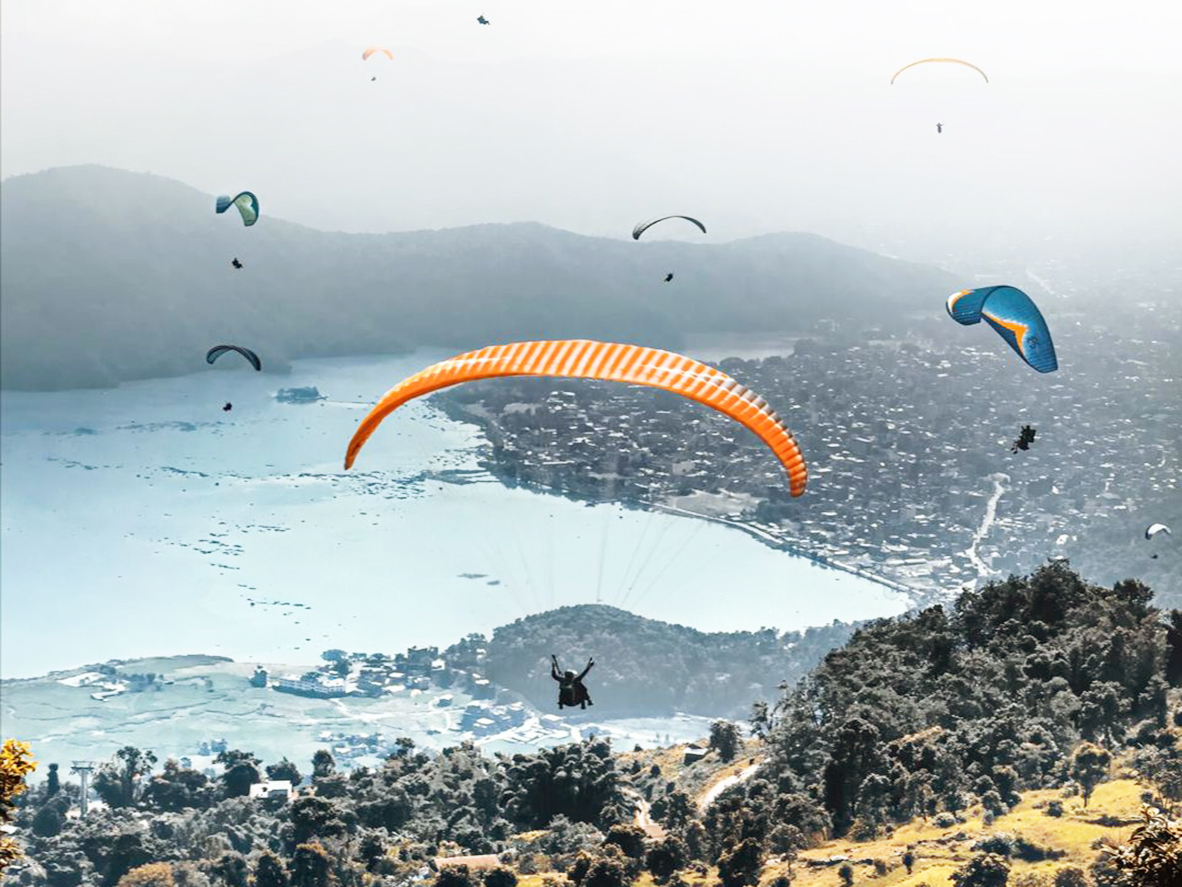 Visitors to one of Nepal's most popular tourist destinations, Pokhara, will quickly notice the dozens of colorful paragliders floating behind the town. Sarangkot Hill, just north of Phewa Lake, is one of the best places in the world to paraglide because of the stable thermals and incredible views. On one side is the mighty Annapurna range of the Himalaya (among the highest peaks in the world), and on the other is Phewa Lake and terraced green farmland and villages.

Sitting at a lower altitude, Pokhara is generally warmer than Nepal's capital, Kathmandu, so even in the middle of winter, paragliding here isn't too cold. In fact, mid-winter is one of the better times to go because the skies are clearest. Paragliding can be done in Pokhara year-round, but flights are often canceled between June and September, when monsoon rains are around. 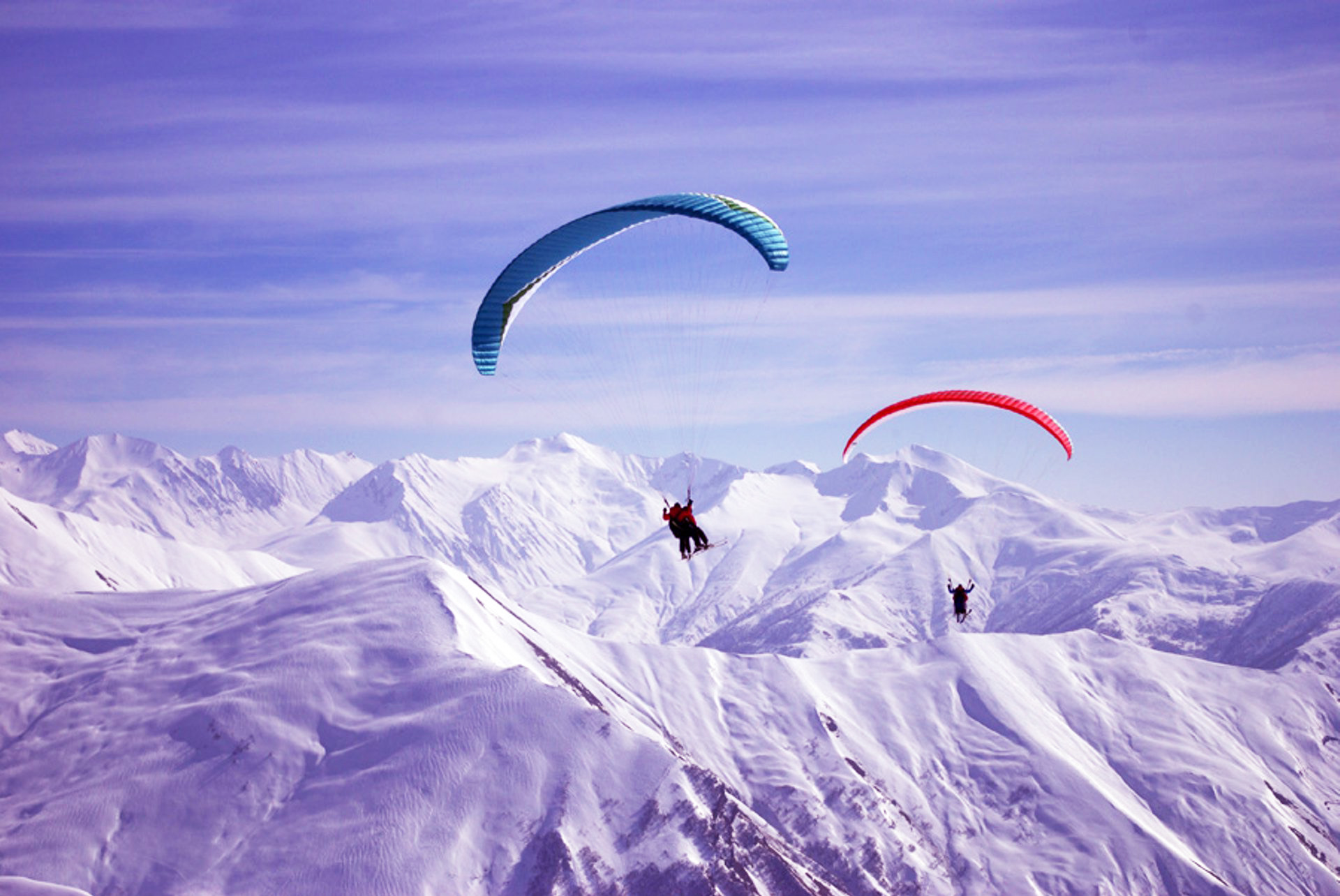 The beautiful Caucasus mountains and the stable weather conditions in Gudauri, Georgia, make it one of the best paragliding destinations in this part of the world. Taking off from an altitude of around 9,800 feet, paragliders will soar even higher before landing some 20 to 45 minutes later, depending on thermal conditions.

Gudauri is a ski resort town, so you can also hit the slopes if you come in the right season. Paragliding can be done year-round here, but like other mountainous, high-altitude regions, temperatures are very cold in the winter. 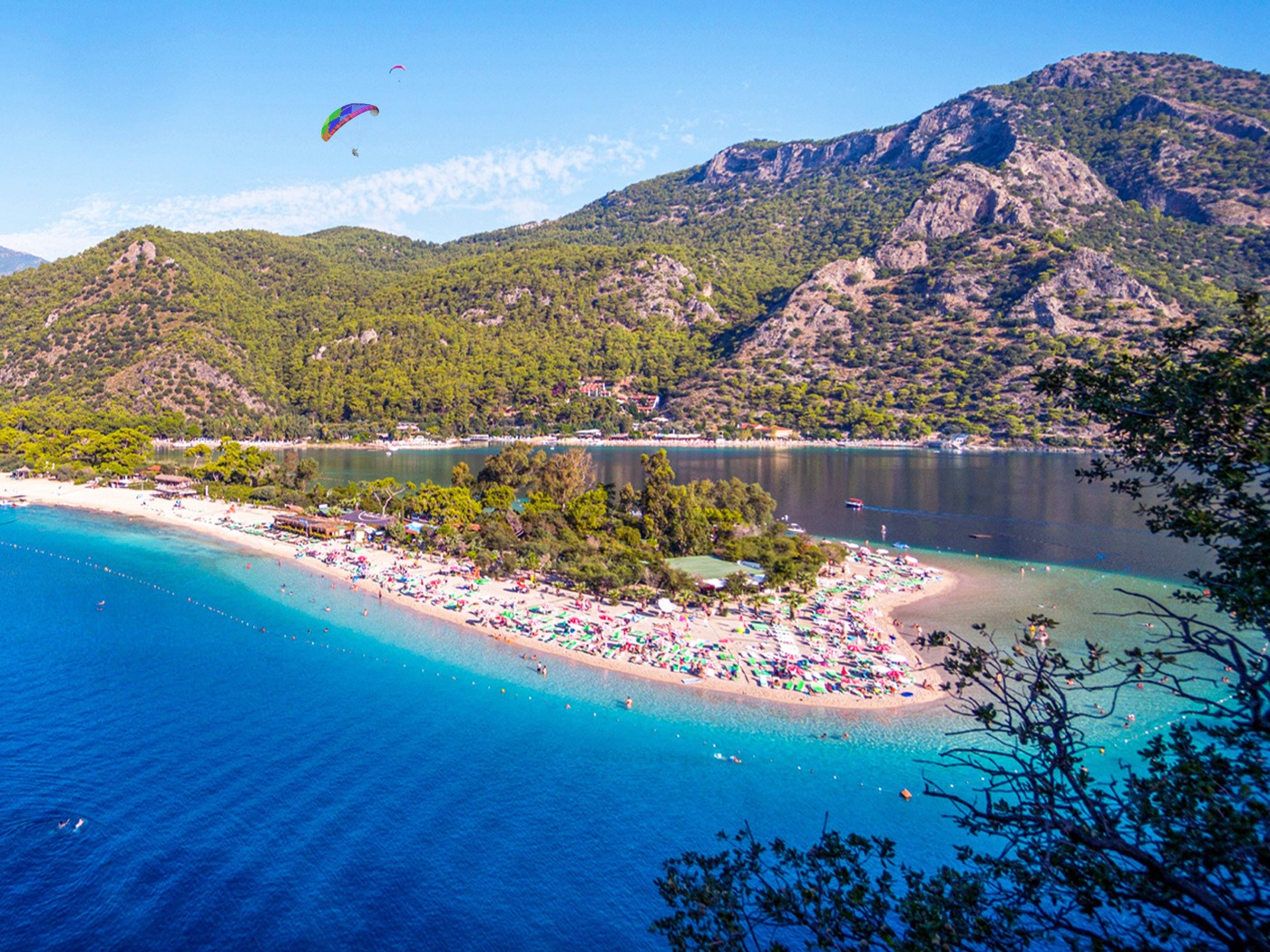 You will get a postcard-like view of the bay of Oludeniz if you paraglide from here. You will have to leap from the top of the Mount Babadag. You will love the white sands beside the blue-green water. You will also get a view of the Taurus mountains. 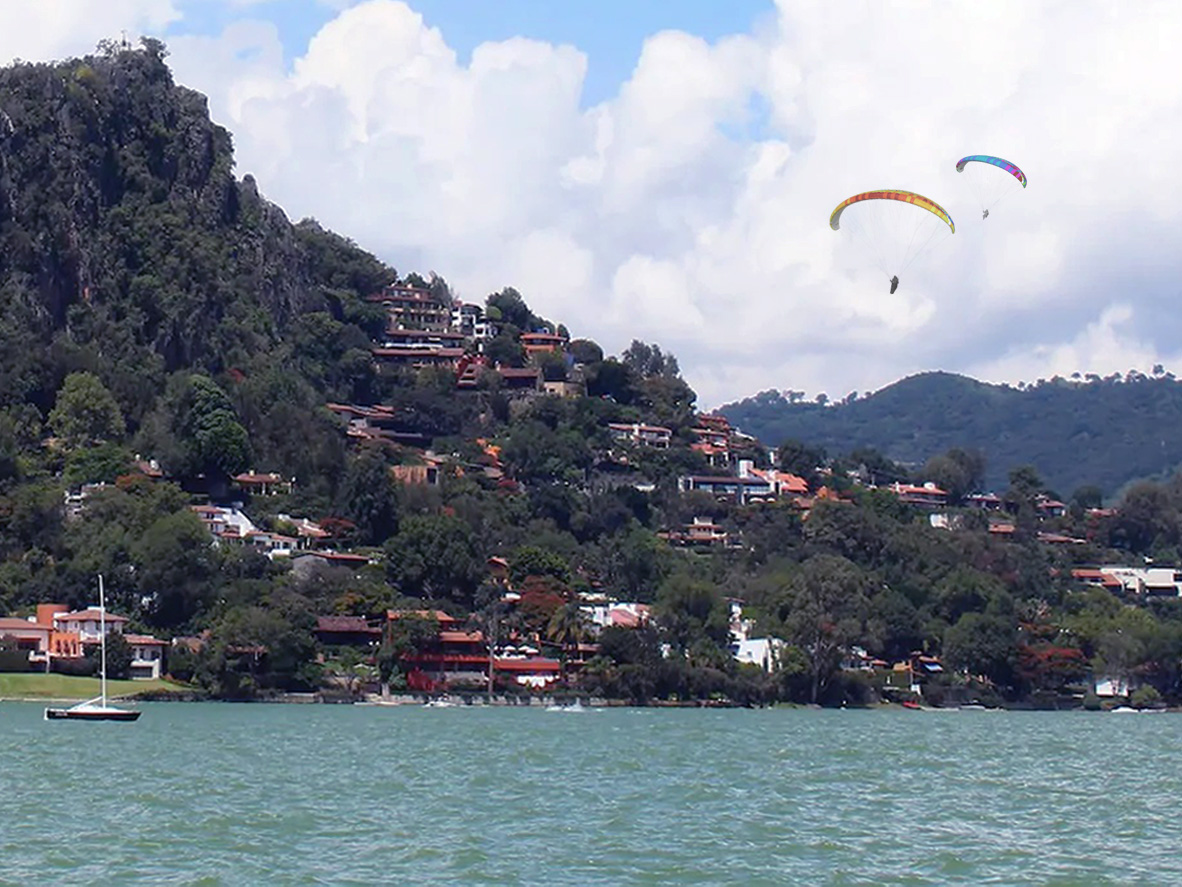 Valle de Bravo is not only Mexico’s top spot for paragliding, but is internationally renowned for its consistently reliable conditions created by low wind pressure. There are two main flying locations, La Torre and El Peñón. The former is a ridge-soaring site 30 minutes from town by car, while the latter is better suited to advanced pilots who want to fly long distances. Wind down in El Santuario Resort & Spa for superb lakeside views and lavish spa facilitie 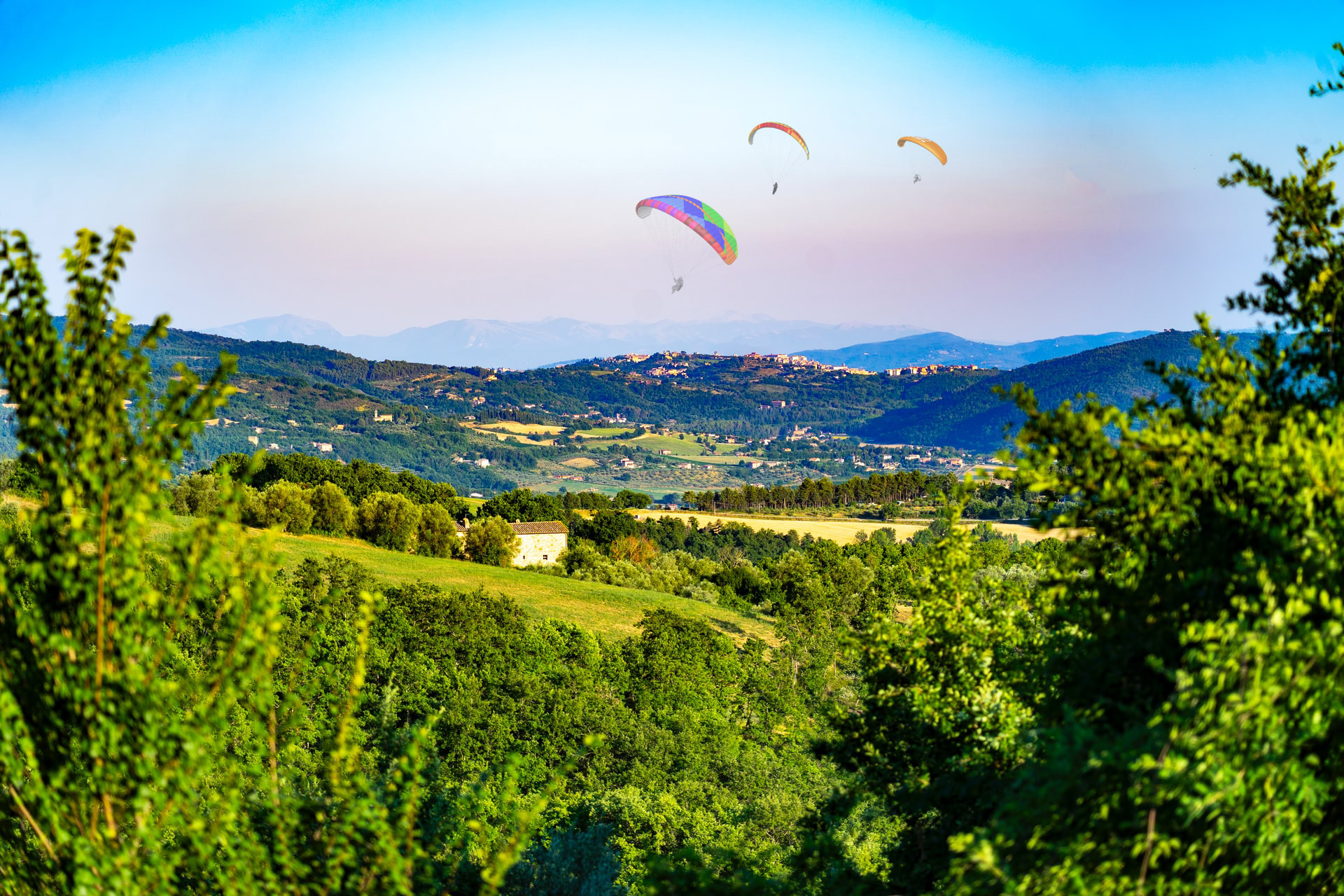 Photo by Nils Schirmer on Unsplash

The Umbrian village of Castelluccio is the highest-altitude village in the Appenine mountains, at 4,763 feet. The updrafts created by the meeting of the plains and mountains make this one of the best places in Italy to try paragliding.

As well as the mountain views that one should expect when paragliding almost anywhere in the world, Castelluccio offers something different. The hills and valleys around the town are covered in colorful wildflowers in the spring and summer (especially May and June), which are especially lovely to see from above. 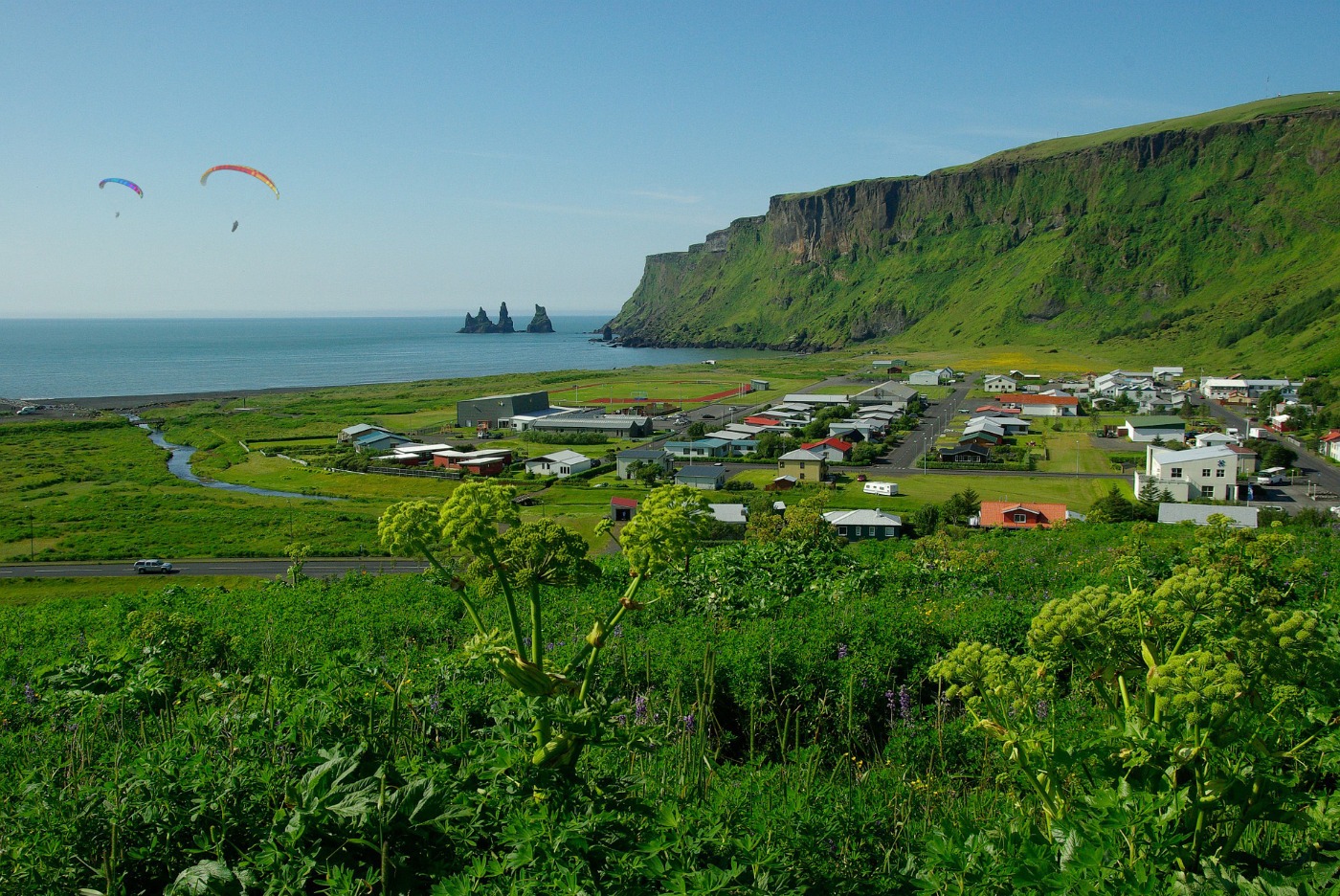 Image by jacqueline macou from Pixabay

Iceland is a little country with a lot of dramatic waterfalls, glaciers, volcanoes, and lava fields, and seeing them from above adds another dimension to your tour of the country. Reykjavik-based companies offer short trips within the area as well as longer day trips that go out to more remote destinations. The latter operate in the warmer, lighter months, generally between April and October—but this depends on the operator and the destination.

While many excursions depart from Reykjavik, some also leave from the small town of Vik on the south coast, in case the desire to go paragliding hits while you're far from the capital. 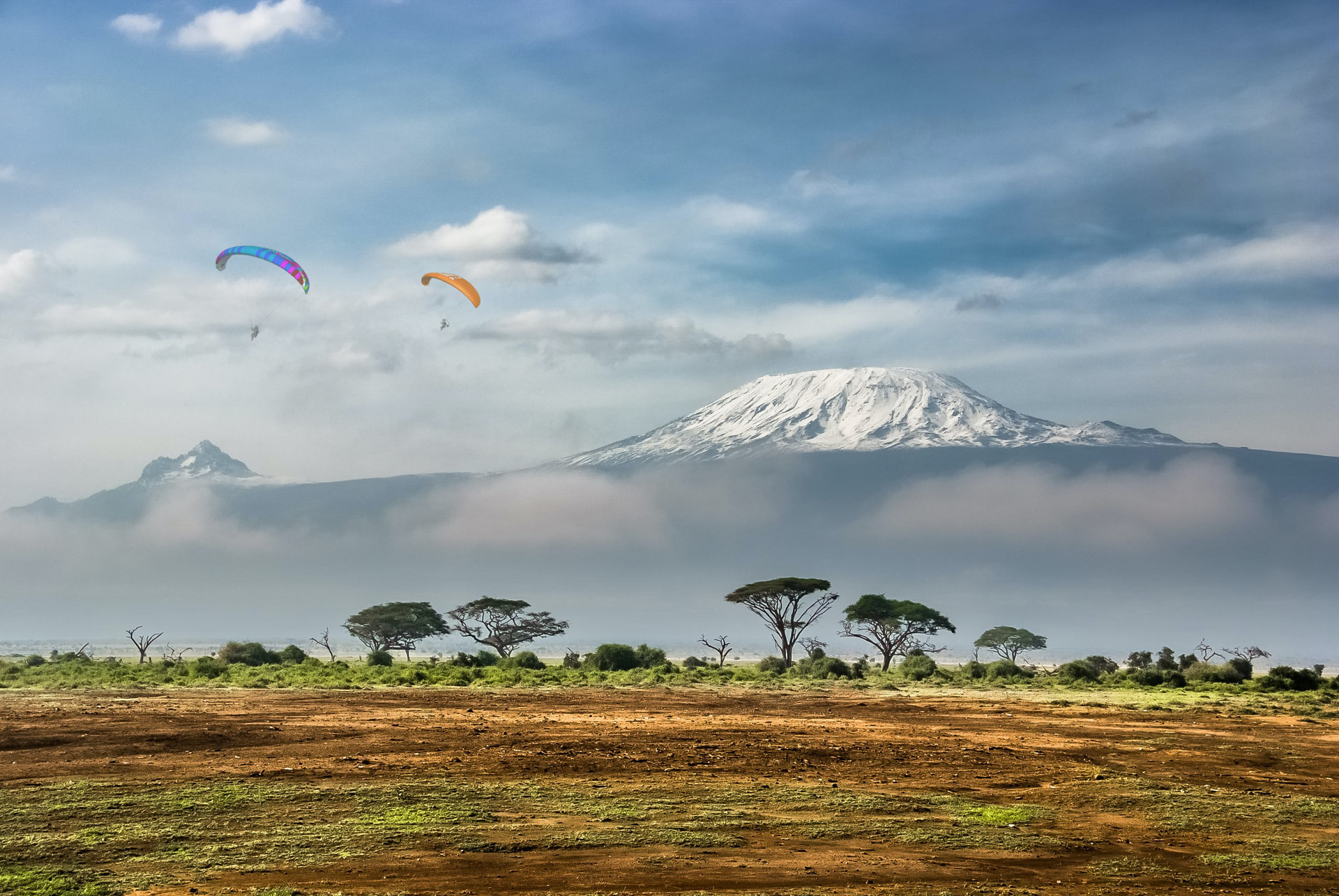 Photo by Sergey Pesterev on Unsplash

While the views of the Elgeyo Escarpment are dramatic from anywhere, they'll especially take your breath away when soaring above Kenya’s Kerio Valley, part of the Great Rift Valley that runs through several countries in East Africa. The 62-mile unbroken ridgeline is ideal for experienced paragliders who want to take to the skies for as long as possible. Tandem flights with instructors are also possible. The best paragliding conditions in the Kerio Valley can be experienced between December and March. 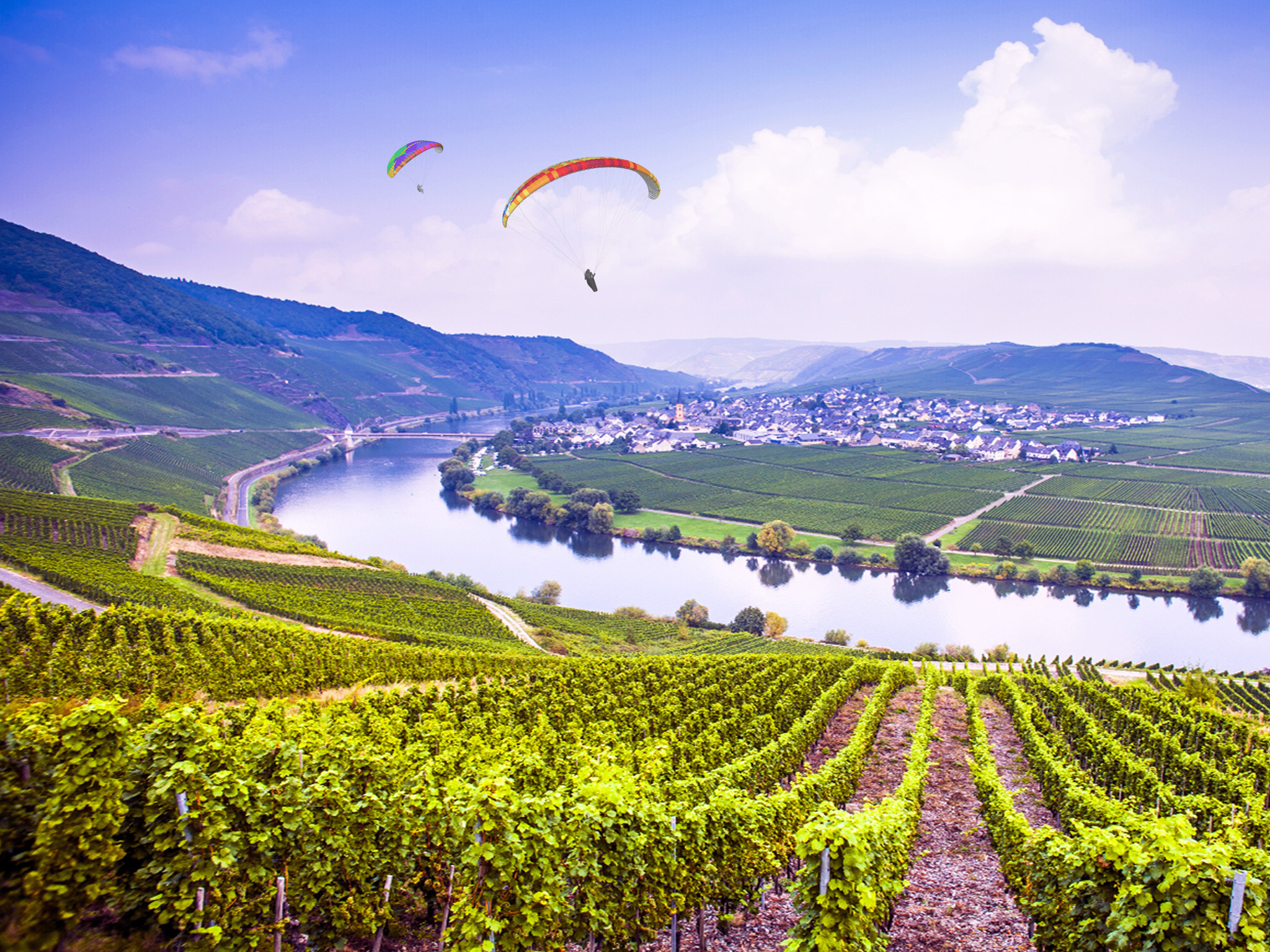 Western Argentina, near Mendoza, is a popular paragliding spot in South America. The weather, winds, and thermals are stable throughout the year, so you're not just restricted to certain seasons here. Many guided paragliding tours use as their takeoff point Cerro Arco Hill, reached via a rugged dirt track. As well as the impressive mountains (the Mendoza region is home to Mount Aconcagua, the highest mountain outside Asia), fliers can admire the vineyards of Argentina's premier wine region from above. 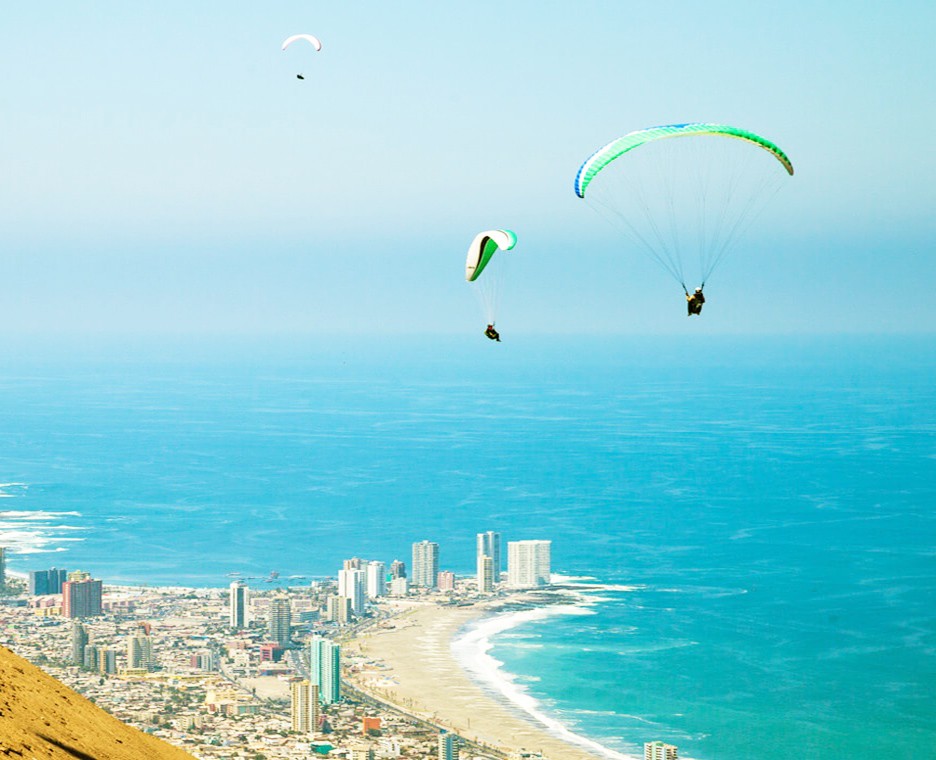 A South American paragliding experience that's completely different from that of Mendoza, the coastal town of Iquique, in northern Chile, is an amazing place to try paragliding because of its proximity to the seemingly endless sand dunes of the Atacama Desert. Conditions are reliable here, too, thanks to generally stable winds. Plus, the risk of rain ruining your paragliding plans is very slim, as the Atacama Desert is one of the driest places in the world. 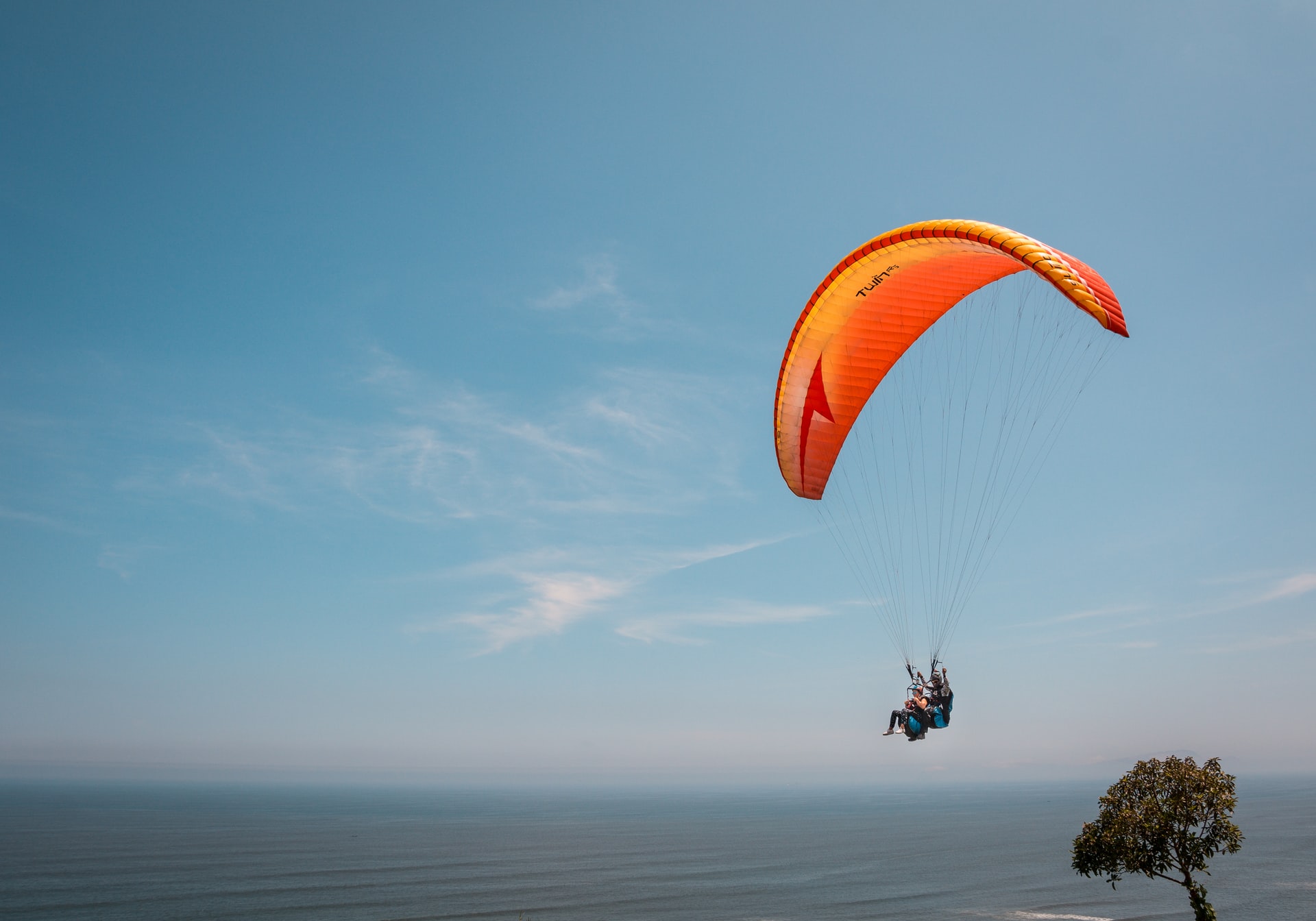 Photo by Adli Wahid on Unsplash

No visit to Lima would be complete without a visit to the Miraflores Cliffs, and travelers who want to get the most of the views can paraglide above them. While the attraction of many paragliding experiences the world over is the natural landscape, in Lima, it's all about the city views that reach far down the coast. Flights generally launch from Parque Raimondi and land on the beach. 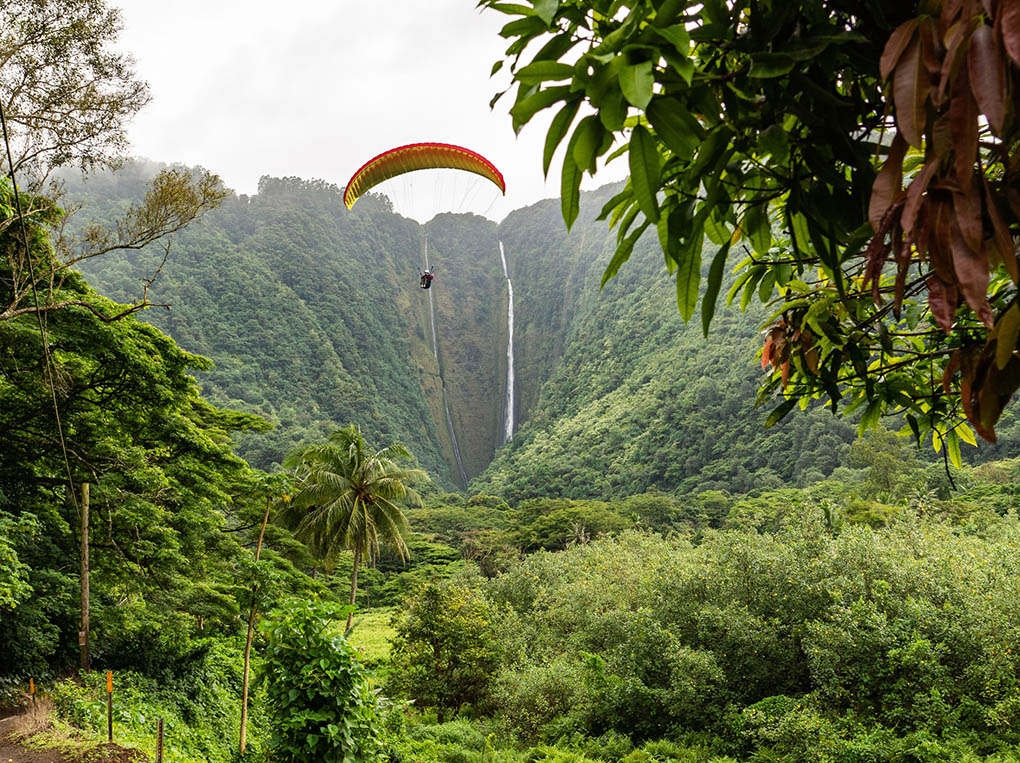 Photo by Martin Zangerl on Unsplash

On the far eastern edge of Oahu Island, Hawai'i, the corrugated, forested Makapu'u Cliffs have been called a paraglider's heaven. Distance records have been set here, as the northeast trade winds provide good conditions for paragliding and hang gliding. As well as the cliffs, fliers can enjoy the sight of the white sand beaches, blue sea, the lighthouse at Makapu'u Point below, and the islands and volcanoes of Hawai'i beyond. Although there is only one main landing point at Makapu'u (beside the highway), there are a few different takeoff points. 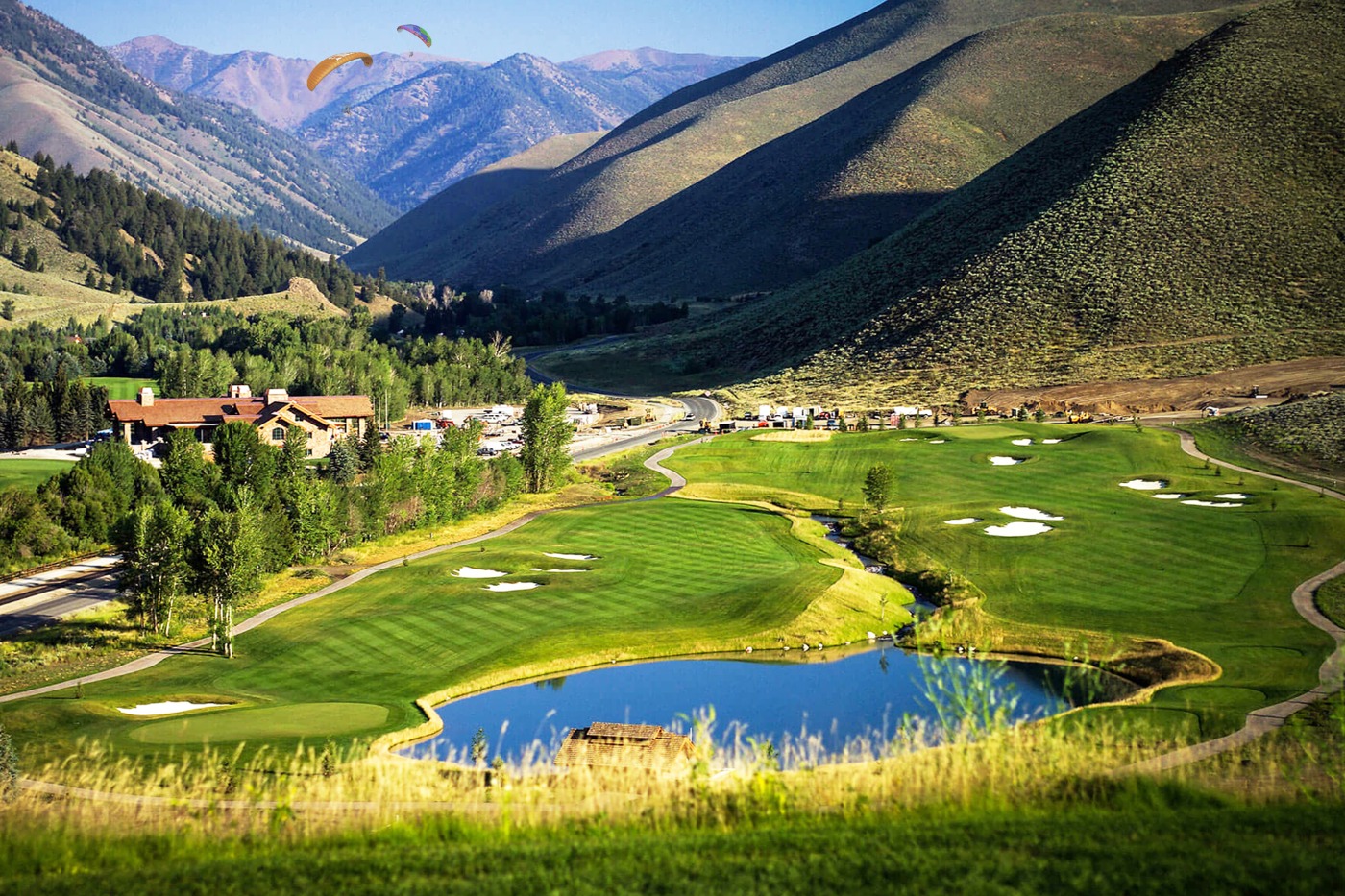 Idaho's Sun Valley, north of Twin Falls, is considered one of the best paragliding spots in the world, let alone in the U.S. In winter, the Sun Valley Resort is full of snow bunnies, while paragliding (and hang gliding) is more enjoyable in warmer temperatures. The updrafts from the desert and mountains create good conditions for taking hours-long flights, although beginners on a tandem flight may want to opt for something shorter. The mountain views are the main attraction here. 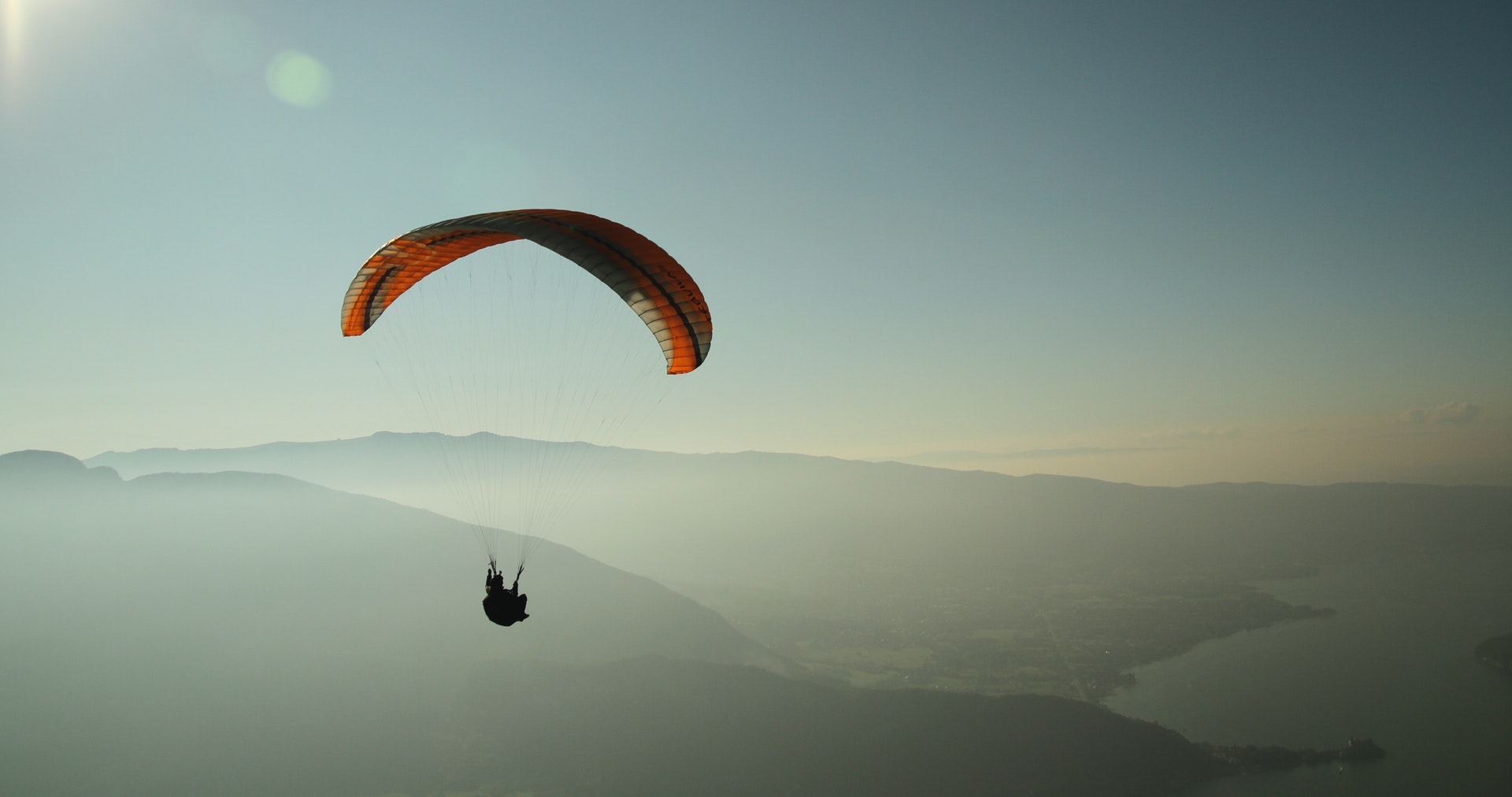 Photo by Jahoo Clouseau from Pexels

Annecy is often used for SIV safety courses, as there are many take-off and landing sites close to the lake. This provides maximum safety for the pilots and protects them from drowning. SIV students usually use the Col de la Forclaz as a launch point directly above the lake. They can practice various techniques such as full collapses, spiral dives, wing-overs and asymmetric collapses.

Annecy is a beautiful place with high mountains and you have a breathtaking view over the lake while flying. Sometimes it’s a bit crowded, but it's worth it.